The price of gold approaches the monthly low ($1446) amid growing hopes for a US-China trade deal, but recent price action limits the downside risk for the precious metal as the former-resistance zone around $1447 (38.2% expansion) to $1457 (100% expansion) appears to be acting as support.

Headlines surrounding the US-China negotiation may continue to sway the price of gold as China’s Global Times reports that the two regions are ‘very close’ in finalizing phase one of the trade deal.

It remains to be seen if a major announcement will be made before the Trump administration implements additional tariffs on December 15 as China Foreign Ministry Spokesperson, Geng Shuang, continues to “hope the US will work with China to find a mutually acceptable solution based on equality and mutual respect, which will serve the interests of China, the US and beyond.”

Hopes for an imminent trade deal may quickly fade as President Donald Trump shows little intension of rolling back tariffs, and the ongoing shift in US trade policy may become a growing concern for the Federal Reserve as “weakness in global growth and trade developments have weighed on the economy and pose ongoing risks.”

Nevertheless, it seems as though the Federal Open Market Committee (FOMC) will take a break from its rate easing cycle as Chairman Jerome Powell tells US lawmakers that “the current stance of monetary policy as likely to remain appropriate as long as incoming information about the economy remains broadly consistent with our outlook of moderate economic growth.” 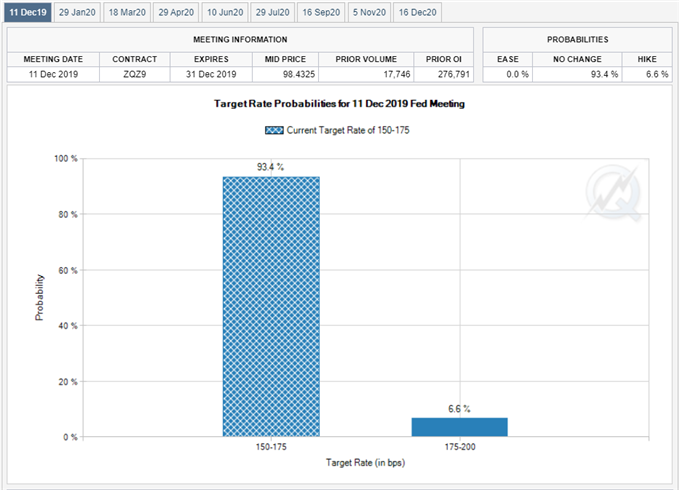 In turn, Fed Fund futures continue to reflect a greater than 90% probability the FOMC will keep the benchmark interest rate on hold at its last meeting for 2019, and a growing number of Fed officials may endorse a wait-and-see approach ahead of the next interest rate decision on December 11 as the central bank appears to be in no rush to reverse the four rate hikes from 2018.

However, the weakening outlook for the global growth may push Chairman Powell and Co. to further insulate the US economy in 2020 as the FOMC Minutes revealed that “many participants continued to view the downside risks surrounding the economic outlook as elevated.”