The price of gold pulls back from the weekly high ($1479) amid renewed hopes for a US-China trade deal, but recent price action raises the scope for a larger rebound as the precious metal reacts to the former-resistance zone around $1447 (38.2% expansion) to $1457 (100% expansion).

Developments surrounding the US-China trade negotiation may continue to influence the price of gold as Vice Premier Liu He expresses that he’s “cautiously optimistic” of reaching a deal with the Trump administration.

However, China Foreign Ministry Spokesperson, Geng Shuang, continues to warn that “China will have to take strong countermeasures” as Congress passes the Hong Kong Human Rights and Democracy Act of 2019, with the official going onto say that “we hope the US will work with China to meet each other halfway and find a proper settlement.”

Growing tension between the US and China may further delay “phase one” of the trade agreement as President Donald Trump shows little intension of rolling back tariffs. It remains to be seen if a major announcement will be made before the Trump administration implements additional tariffs on December 15, and the ongoing shift in US trade policy may become a growing concern for the Federal Open Market Committee (FOMC) as “weakness in global growth and trade developments have weighed on the economy and pose ongoing risks.”

The FOMC Minutes revealed that “many participants continued to view the downside risks surrounding the economic outlook as elevated,” but recent remarks from Fed officials suggest the central bank will endorse a wait-and-see approach at its next interest rate decision on December 11 as Chairman Jerome Powell tells US lawmakers that “the current stance of monetary policy as likely to remain appropriate as long as incoming information about the economy remains broadly consistent with our outlook of moderate economic growth.” 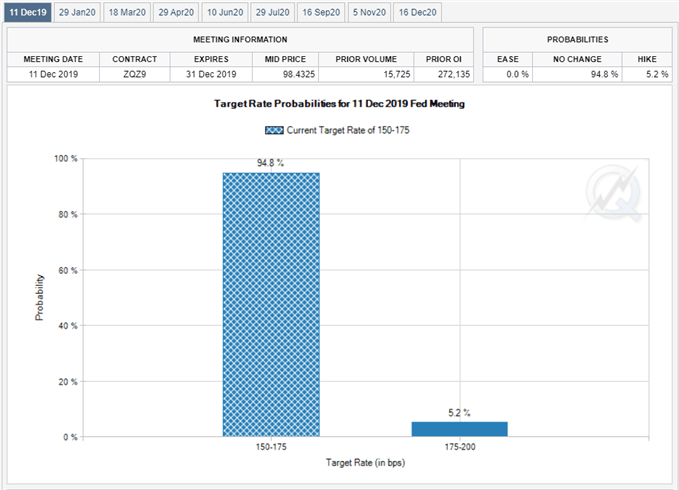 In turn, Fed Fund futures highlights a greater than 90% probability the FOMC will keep the benchmark interest rate on hold at its last meeting for 2019, but the central bank may keep the door open to further embark on its rate easing cycle as “the risk that a global growth slowdown would further weigh on the domestic economy remained prominent.” As a result, low interest rates along with fears of a global recession may heighten the appeal of gold as market participants look for a hedge against fiat currencies.

With that said, headlines surrounding the US-China trade negotiations may continue to sway the near-term outlook for gold prices, but the reaction to the former-resistance zone around $1447 (38.2% expansion) to $1457 (100% expansion) helps to rule out the threat of a Head-and-Shoulders formation as the price for bullion snaps the string of lower highs and lows carried over from earlier this month.