USD/CAD retains the advance from earlier this week despite the reaction to Canada’s Consumer Price Index (CPI), and fresh comments coming out of the Bank of Canada (BoC) may spur a run at the October high (1.3348) as the central bank alters the outlook for monetary policy.

Signs of sticky price growth sparked a bullish reaction in the Canadian Dollar as the headline reading for inflation held steady at 1.9% in October. However, the move was short lived, with USD/CAD pushing to a fresh weekly high (1.3328) ahead of the fireside chat with BoC Governor Stephen Poloz.

The development may encourage the BoC to keep the benchmark interest rate on hold at its last meeting for 2019 as “the Bank expects inflation to track close to the 2 percent target over the projection horizon,” but the central bank appears to be on track to follow its major counterparts as Governor Poloz and Co. anticipate the Canadian economy “to slow in the second half of this year to a rate below its potential.” 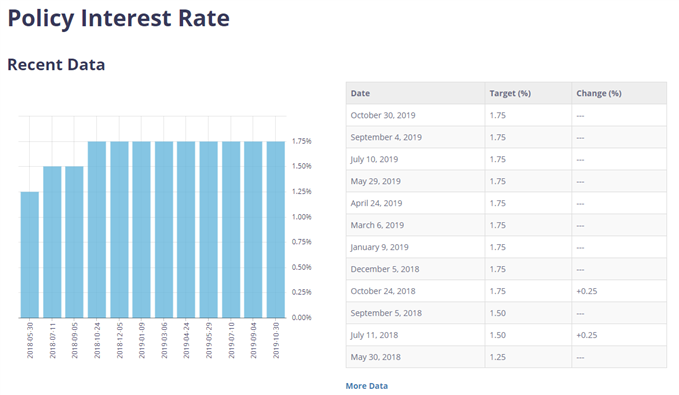 In turn, the BoC may prepare households and businesses for an imminent rate cut as the “Governing Council considered whether the downside risks to the Canadian economy were sufficient at this time to warrant a more accommodative monetary policy as a form of insurance.”

The remarks suggest the BoC will take a preemptive approach in managing monetary policy as the “Governing Council is mindful that the resilience of Canada’s economy will be increasingly tested as trade conflicts and uncertainty persist.”

As a result, a batch of dovish comments from Governor Poloz is likely to drag on the Canadian Dollar, and the central bank may continue to change its tone at the next meeting on December 4 amid the weakening outlook for global growth.

With that said, the Canadian Dollar may exhibit a more bearish behavior over the remainder of the week, and the shift in the BoC’s forward guidance may keep USD/CAD afloat especially as the Federal Reserve appears to be moving away from its rate easing cycle.