USD/CAD trades to a fresh monthly high (1.3272) as the Bank of Canada (BoC) continues to alter the outlook for monetary policy, and the Canadian Dollar may face a more bearish fate over the coming days as the central bank appears to be on track to follow its major counterparts.

USD/CAD snaps the string of lower highs and lows from the previous week as BoC Senior Deputy Governor Carolyn Wilkins warns that “the global context has worsened, increasing risks to the global expansion and the chances of financial stress that could spill over into Canada.”

Ms. Wilkins pointed out that “the Canadian economy is performing relatively well overall,” but went onto say that the BoC has “other options in our tool kit, such as extraordinary forward guidance and large-scale asset purchases” as the central bank shows a greater willingness to reverse the rate hikes from 2018.

In turn, updates to Canada’s Consumer Price Index (CPI) may do little to influence the monetary policy outlook as the headline reading for inflation is expected to hold steady at 1.9% for the third consecutive month.

Looking ahead, the fireside chat with Governor Stephen Poloz may reveal a further shift in the forward guidance for monetary policy as the central bank now expects growth “to slow in the second half of this year to a rate below its potential.” It seems as though the BoC will continue to change its tone over the coming months as the “Governing Council is mindful that the resilience of Canada’s economy will be increasingly tested as trade conflicts and uncertainty persist.” 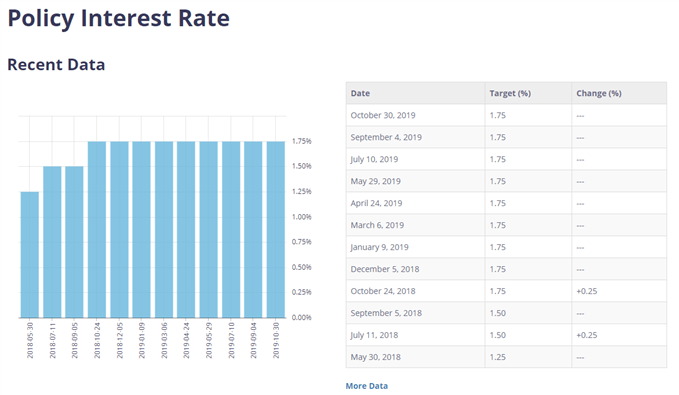 In fact, the BoC now appears to be on track to follow its major counterparts as the “Governing Council considered whether the downside risks to the Canadian economy were sufficient at this time to warrant a more accommodative monetary policy as a form of insurance.”

With that said, it remains to be seen if Governor Poloz and Co. will keep the benchmark interest rate on hold at the next meeting on December 4, but the material shift in the forward guidance for monetary policy may keep USD/CAD afloat especially as the Federal Reserve appears to be moving away from its rate easing cycle.