The price of oil pulls back from a fresh monthly high ($58.17) as the Organization of the Petroleum Exporting Countries (OPEC) show little intentions of taking additional steps to balance the energy market.

The price of oil struggles to retain the advance from earlier this month as OPEC Secretary GeneralMohammad Barkindo insists that the production cuts from earlier this year are “providing the groundwork for a sustainable stability as well as adequate and timely investment in the industry.”

The comments suggest OPEC and its allies will refrain from making a major announcement at the next meeting starting on December 5 as the group anticipates stable consumption over the remainder of the year. 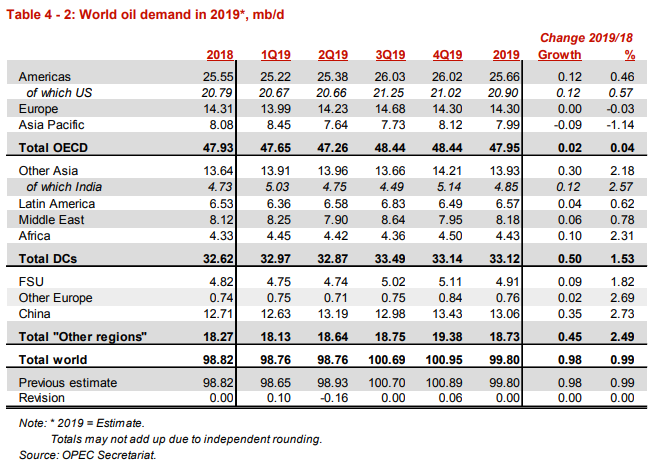 The most recent Monthly Oil Market Report (MOMR) shows global oil demand holding steady at 0.98 mb/d in 2019, with the outlook for 2020 also unchanged from the previous update. It seems as though OPEC and its allies are in no rush to further reduce oil output as the US and China, the two largest consumers of oil, try to nail out a trade agreement.

However, the International Energy Agency (IEA) warns that “global refinery activity is expected to rebound sharply in 2020,” and went onto say that “the hefty supply cushion that is likely to build up during the first half of next year will offer cold comfort to OPEC+ ministers.”

Signs of excess supply are likely to become a growing concern for OPEC and its allies as US crude production hits a fresh record high in November.

Recent figures coming out of the US Energy Information Administration (EIA) showed weekly field production of crude oil climbing to 12,800K from 12,600K in the week ending November 1, and it remains to be seen if OPEC and its allies will unveil more measures to balance the energy market as Russia Energy Minister Alexander Novak pledges to uphold “the agreement signed on July 2 to extend the deal until April 1.”

With that said, the ‘Declaration of Cooperation’ may continue to ward off a bear market, but the price of oil may come under pressure ahead of the next OPEC meeting amid signs of growing supply.

For more in-depth analysis, check out the 4Q 2019 Forecast for Oil