Slowing US Economy Heightens Appeal of Gold Ahead of FOMC Minutes

The price of gold consolidates ahead of the Federal Open Market Committee (FOMC) Minutes, but the weakening outlook for the US economy may heighten the appeal of bullion as market participants look for a hedge against fiat-currencies.

Slowing US Economy Heightens Appeal of Gold Ahead of FOMC Minutes

The price of gold struggles to retain the rebound from the previous week as a growing number of Federal Reserve officials tame speculation for lower interest rates.

Recent remarks from St. Louis Fed President James Bullardsuggest the central bank will keep the benchmark interest rate on hold for the foreseeable future as the 2019-voting member on the FOMC insists “the rate cuts that we've had in the last three meetings are providing insurance against more substantial slowdown in the U.S. economy.”

Mr. Bullard went onto say that “now it makes sense to wait and see how the economy responds during the fourth quarter here and into 2020,” and the FOMC Minutes may highlight a similar tone as the “adjustment toward lower rates in the face of trade policy uncertainty may help facilitate somewhat faster growth in 2020.” 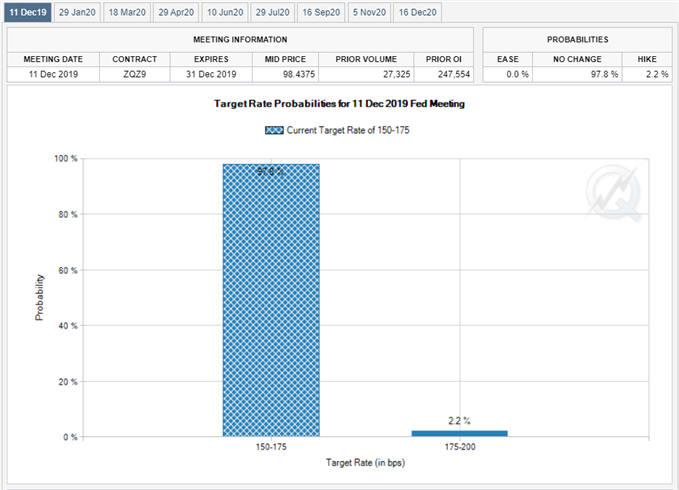 In turn, Fed Fund futures show a greater than 90% probability the FOMC will keep the benchmark interest rate on hold at its last meeting for 2019, but doubts surrounding “phase one” of the US-China trade agreement may push the central bank to further insulate the economy amid the weakening outlook for global growth. 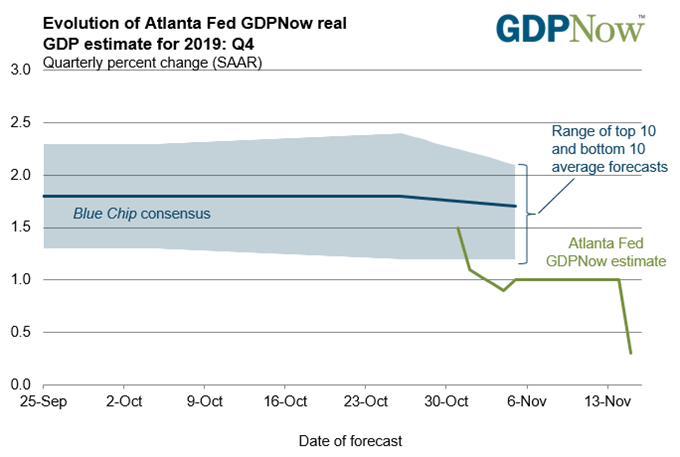 In fact, the Atlanta Fed GDPNow model projects the US economy to grow 0.3% in the fourth quarter of 2019 versus 1.0% on November 8, and Chairman Jerome Powell and Co. may keep the door open to implement lower interest rates as President Donald Trump shows little intentions of rolling back tariffs.

With that said, headlines surrounding the US-China trade negotiations may continue to sway the near-term outlook for gold prices, but low interest rates along with signs of a global recession may heighten the appeal of gold as market participants look to hedge against fiat currencies.

At the same time, the reaction to the former-resistance zone around $1447 (38.2% expansion) to $1457 (100% expansion) helps to rule out the threat of a Head-and-Shoulders formation as the region appears to be acting as support.