The price of gold has marked a failed attempt to break out of the range-bound price action from the previous month, and developments coming out of the US may continue to influence the precious metal as the Federal Reserve starts to endorse a wait-and-see approach for monetary policy.

Gold gives back the advance following the Federal Reserve rate cut as the ISM Non-Manufacturing survey improves in October, with the index climbing to 54.7 from 52.6 in September.

At the same time, recent remarks from Fed officials indicate that the central bank will revert to a wait-and-see approach after reducing the benchmark interest rate for the third time in 2019 as the central bank believes “monetary policy is in a good place.”

Recent remarks from Dallas Fed President Robert Kaplan suggest the central bank will retain the current policy for the foreseeable future as the 2020 voting-member on the Federal Open Market Committee (FOMC) insists that the current stance of monetary policy is “mildly accommodative.”

In addition, Minneapolis Fed President Neel Kashkari, who also votes on the FOMC in 2020, argues that “interest rates are now around neutral, or modestly accommodative,” and it seems as though the central bank is on track to retain the current policy at the next interest rate decision on December 11 especially as the US and China look to sign “phase one” of the trade deal over the coming days. 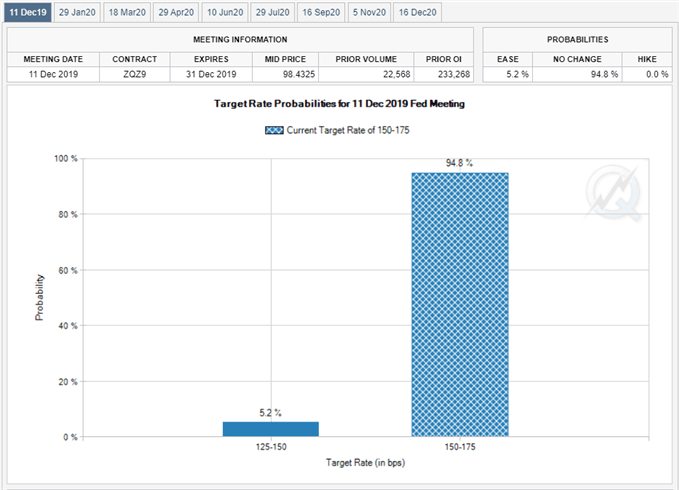 In fact, Fed Fund futures show a greater than 90% probability for the FOMC to keep the benchmark interest rate at 1.50% to 1.75% over the remainder of the year, but it remains to be seen if Fed officials will project a lower trajectory for the benchmark interest rate when the central bank updates the Summary of Economic Projections (SEP) in December amid the ongoing shift in US trade policy.

With that said, little indications for another Fed rate cut may continue to produce range-bound conditions for gold, with the near-term outlook still mired by a Head-and-Shoulders formation.

However, falling interest rates along with signs of a global recession may heighten the appeal of gold as market participants look to hedge against fiat currencies.

In turn, the price of gold may make further attempts to break out of the range bound price action carried over from the previous month as a bullish Flag formation takes shape.