The monthly opening range for AUD/USD suggests the correction from the yearly low (0.6671) is nearing an end as the exchange rate pullbacks ahead of the October-high (0.6930).

AUD/USD showed a bullish reaction to the Reserve Bank of Australia (RBA) interest rate decision as the central bank kept the official cash rate (OCR) at 0.75% in November, but it seems as though Governor Philip Lowe and Co. will continue to insulate the Australian economy as the board remains “prepared to ease monetary policy further if needed.” 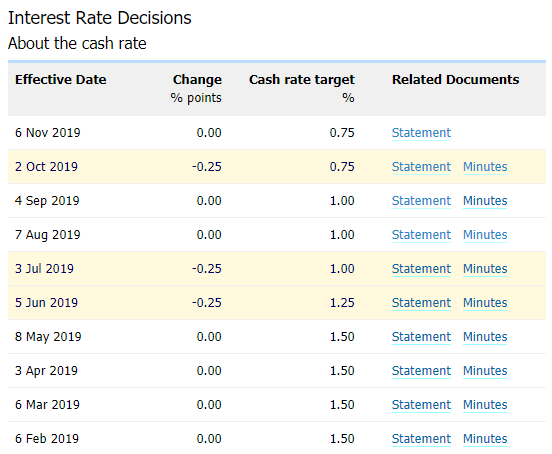 The dovish forward guidance suggests the RBA will keep the door open to further embark on its rate easing cycle even though the US and China, Australia’s largest trading partner, attempt to nail out a trade agreement.

US Commerce Secretary Wilbur Ross insists that the Trump administration is “moving forward with negotiations” even though Chile no longer plans to host the Asia-Pacific Economic Cooperation (APEC) meeting scheduled for November 15-16, but it remains to be seen if “phase one” of the trade deal will be signed over the coming days as China Foreign Ministry Spokesperson Geng Shuang argues that the US needs to “to respect and support regional countries' efforts, and not to stir up troubles, destabilize the region or undermine East Asian cooperation.”

The comments suggest more work needs to be done to finalize the trade deal as China pledge to retaliate to the US blacklist. As a result, the RBA may continue to respond to the weakening outlook for the global economy especially as the International Monetary Fund (IMF) cuts its growth forecast for the Asia/Pacific region.

In turn, the Australian Dollar may face headwinds ahead of the next RBA meeting on December 3, and the monthly opening range for AUD/USD suggests the correction from the yearly low (0.6671) is nearing an end as the exchange rate continues to pullback from the October-high (0.6930).