AUD/USD gives back the bullish reaction to the Federal Reserve interest rate decision, and the Australian Dollar may struggle to hold its ground ahead of the Reserve Bank of Australia (RBA) meeting amid doubts surrounding the US-China trade deal.

AUD/USD cleared the September-high (0.6895) as the Federal Open Market Committee (FOMC) reduced the benchmark interest rate to a fresh threshold of 1.50% to 1.75%, with Chairman Jerome Powell and Co. pledging to “respond accordingly” to the economic outlook

However, AUD/USD pulls back from the October-high (0.6930) as Chile no longer plans to host the Asia-Pacific Economic Cooperation (APEC) meeting scheduled for November 15-16, and it remains to be seen if “phase one” of the US-China trade deal will be signed over the coming days as President Donald Trump tweets that a “new location will be announced soon.”

President Trump went onto say that “phase one” will account for “about 60% of total deal,” but China, Australia’s largest trading partner, appears to be in no rush to sign the agreement as Foreign Ministry Spokesperson Geng Shuang urges “US officials to reflect upon and correct their wrongdoing, stop saying or doing things that harm China-US relations.” The comments suggest more work needs to be done to finalize the trade deal as Chinese officials pledge to retaliate to the US blacklist.

In turn, the weakening outlook for global growth may encourage the Reserve Bank of Australia (RBA) to maintain a dovish forward guidance especially as “the Bank's most recent forecasts suggested that the unemployment and inflation outcomes over the following couple of years were likely to be short of the Bank's goals.” 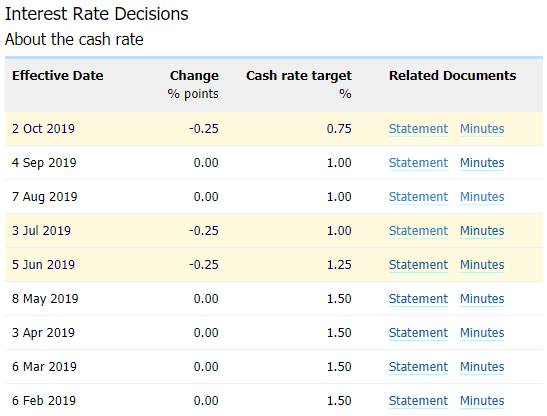 Nevertheless, the RBA is expected to keep the official cash rate (OCR) at the record-low of 0.75% on November 5, but Governor Philip Lowe and Co. may reiterate that the central bank stands ready “to ease monetary policy further if needed” as the International Monetary Fund (IMF) cuts its growth forecast for the Asia/Pacific region.

With that said, the Australian Dollar may face headwinds as the RBA keeps the door open to further insulate the economy, but the near-term outlook for AUD/USD is clouded with mixed signals as the exchange rate struggles to extend the series of higher highs and lows from earlier this week, while the Relative Strength Index (RSI) marks a false attempt to snap the bullish formation from October.