The recent rebound in NZD/USD unravels ahead of the September-high (0.6451), and the exchange rate may continue to give back the advance from earlier this month as it carves a fresh series of lower highs and lows.

NZD/USD extends the decline from the monthly-high (0.6436) as the Reserve Bank of New Zealand (RBNZ) defends the 50bp rate cut in August, with Assistant Governor Christian Hawkesby insisting that “it would be better to do too much too early, than do too little too late.”

The speech by Mr. Hawkesby suggests the RBNZ will continue to take a preemptive approach in managing monetary policy in order to “demonstrate our ongoing determination to ensure inflation increases to the mid-point of the target.” 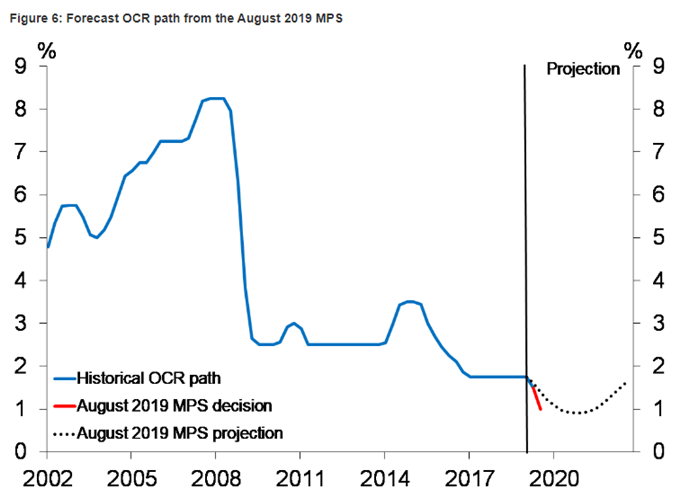 It remains to be seen if the RBNZ will push the official cash rate (OCR) closer to zero as the US and China appear to be on track to sign “phase one” of the trade deal. In fact, the US Trade Representative (USTR) recently released a statement that the Trump administration is “considering extending for up to twelve months certain exclusions from additional tariffs on Chinese imports that were granted last December.”

The narrow threat of a global trade war may keep the RBNZ on the sidelines at the next meeting on November 13, but Governor Adrian Orr and Co. may continue to endorse a dovish forward guidance amid the weakening outlook for the Asia/Pacific region.

In turn, the RBNZ may reiterate that as “there remains scope for more fiscal and monetary stimulus if necessary” especially as Deputy GovernorGeoff Bascand reveals that “the Reserve Bank is undertaking further preparatory work on less conventional monetary policy tools.”

With that said, the New Zealand Dollar remains exposed to the RBNZ’s rate easing cycle, with NZD/USD at risk of facing a more bearish fate over the coming days as the rebound from the 2019-low (0.6204) fails to produce a test of the September-high (0.6451).