The price of gold trades in a narrow range amid growing bets for a Federal Reserve rate cut, and failure to test the monthly-low ($1459) may bring the topside targets back on the radar as a bull-flag formation takes shape.

Gold prices may continue to consolidate as the US-China trade war appears to be coming to an end, and it seems as though more details will be announced ahead of the Asia-Pacific Economic Cooperation (APEC) meetingscheduled for November 15-16 as President Donald Trump insists that “the phase one deal can be finalized & signed soon.”

It remains to be seen if the trade truce will lead to an agreement as China vows to retaliate to the US blacklist, with Foreign Ministry Spokesperson Hua Chunying pledging to “make an official announcement” as to whether President Xi Jinping will attend the APEC meeting in Chile. 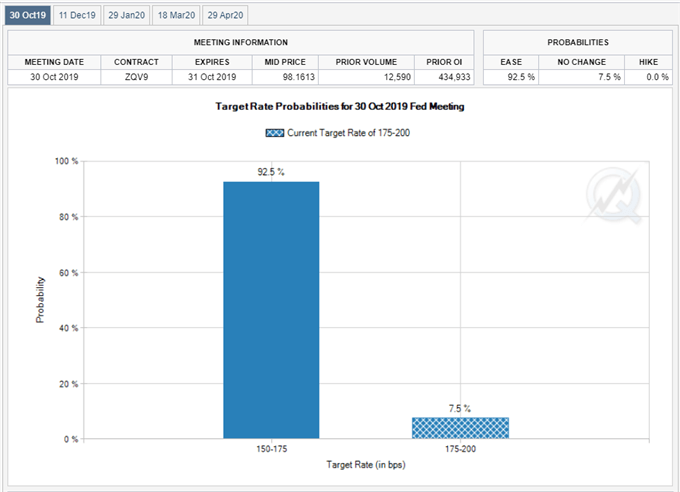 With that said, the Federal Reserve may attempt to buy time after delivering back-to-back rate cuts, but Fed Fund futures show growing speculation for another 25bp reduction on October 30, with the gauge now reflecting a greater than 90% probability for the benchmark interest rate to narrow to 1.50% to 1.75%.

The growing dissent within the Federal Open Market Committee (FOMC) may fuel fears of a policy error as the central bank makes an unexpected announcement to purchase US Treasury Bills in the secondary market, and recent data prints coming out of the US economy may push Chairman Jerome Powell and Co. to further embark on the rate easing cycle amid signs of slowing consumption.

The FOMC may continue to insulate the US economy as private-sector spending “has been the key driver of growth,” and the central bank may have little choice but to reverse the four rate hikes from 2018 as “weakness in global growth and trade policy uncertainty haveweighed on the economy and pose ongoing risks.”

In turn, falling interest rates along with fears of a global recession may heighten the appeal of gold, and market participants may look to hedge against fiat currencies as the International Monetary Fund (IMF) continues to cut its global growth forecast.

Keep in mind, the near-term outlook for gold remains mired by a head-and-shoulders formation, with the precious metal still at risk for a larger correction as the Relative Strength Index (RSI) continues to track the bearish formation from June.