EUR/USD pares the decline from the end of September following a slew of dismal data prints coming out of the US economy, and the monthly opening range foreshadows a larger rebound in Euro Dollar as the exchange rate carves a series of higher highs and lows.

EUR/USD extends the rebound from the yearly-low (1.0879) as the ISM Non-Manufacturing survey weakens more-than-expected in September, with the gauge slipping to 52.6 from 56.4 the month prior to mark the lowest reading since 2016.

A deeper look at the report shows the Employment component also narrowing to 50.4 from 53.1 in August, and the Non-Farm Payrolls (NFP) report may highlight a similar dynamic as the shift in US trade policy drags on business sentiment. 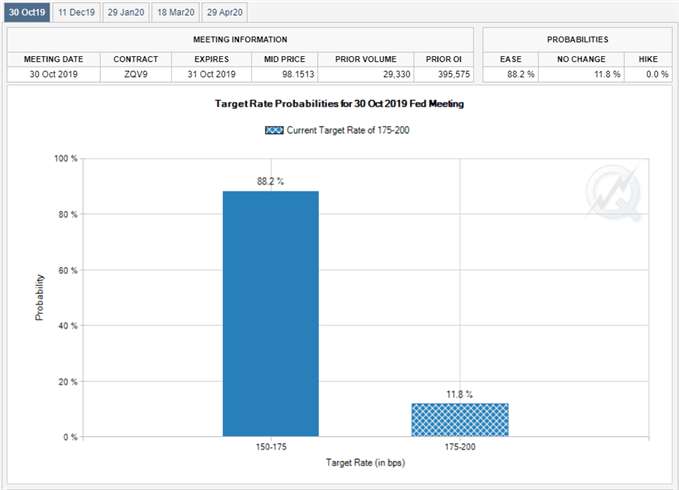 In turn, Fed Fund futures now highlight a greater than 80% probability for another 25bp reduction on October 30, and the Federal Open Market Committee (FOMC) may come under increased pressure to further insulate the economy amid growing evidence of a looming recession.

It remains to be seen if the FOMC will further embark on its rate easing cycle as Fed officials see the benchmark interest rate around 1.50% to 1.75% ahead of 2020, and the growing divide at the central bank may push the committee to take a more gradual approach in managing monetary policy as Chairman Jerome Powell insists that “the future course of monetary policy will depend on how the economy evolves.”

At the same time, Fed Governor Richard Clarida argues that the US economy is in a “good place” following the back-to-back rate cuts, with the permanent voting-member on the FOMC going onto say that the central bank will “act as appropriate” during an interview with the Wall Street Journal.

The comments suggest the FOMC is in no rush to reverse the four rate hikes from 2018 as the central bank forecasts the US economy to expand 2.2% per annum in 2019, but growing speculation for an October rate cut may fuel the recent rebound in EUR/USD as the exchange rate carves a series of higher highs and lows.