The price of gold pares the decline from earlier this week as the US ISM Manufacturing survey slips to a 10-year low, but the precious metal may continue to search for supportas a head-and-shoulders formation takes shape.

Gold bounces back from the weekly-low ($1459) as the ISM Manufacturing survey unexpectedly narrows to 47.8 from 49.1 in August to mark the lowest reading since 2009, and dismal data prints coming out of the US economy may continue to shore up the precious metal as the growing divide at the Federal Reserve raises the threat of a policy error.

Signs of a slowing economy is likely to put increased pressure on the Federal Open Market Committee (FOMC) to reverse the four rate hikes from 2018 especially as President Donald Trump tweets “Fed rate too high,” but it seems as though the central bank is in no rush to further embark on its rate easing cycle as Chairman Jerome Powell and Co. see the benchmark interest rate around 1.50% to 1.75% ahead of 2020.

At the same time, recent remarks from Chicago Fed President Charles Evans suggest the central bank will move to the sidelines after delivering back-to-back rate cuts as the 2019-voting member on the FOMC expects “the US economy to grow about 2-1/4 percent this year.”

Mr. Evans goes onto say that “there are limits to what monetary policy can do” as the Trump administration struggles to reach a trade deal with China, with the official talking down the risk of a policy error as he sees inflation “modestly” overshooting the 2% target over the policy horizon. 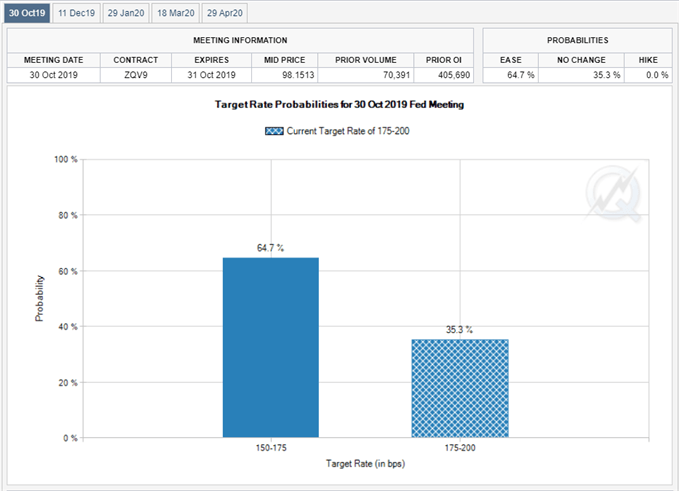 Nevertheless, Fed Fund futures now reflect a greater than 60% probability for another 25bp reduction at the next interest rate decision on October 30, but the growing divide at the Federal Reserve may push the central bank to the sidelines as Chairman Powell argues that “the future course of monetary policy will depend on how the economy evolves.”

With that said, the mixed language coming out of the FOMC may push market participants to hedge against fiat-currencies, but recent price action in gold warns of a larger correction as a head-and-shoulders formation takes shape.