AUDUSD gapped higher at the start of the week despite waning hopes of a US-China trade deal, but recent price action warns of a further decline in the exchange rate as it carves a series of lower highs and lows.

AUDUSD gives back the rebound from the monthly-low (0.6688) even though the Federal Reserve delivers back-to-back rate cuts in September, and current market conditions may continue to drag on the exchange rate as the weakening outlook for global growth puts pressure on the Reserve Bank of Australia (RBA) to further insulate the Australian economy. 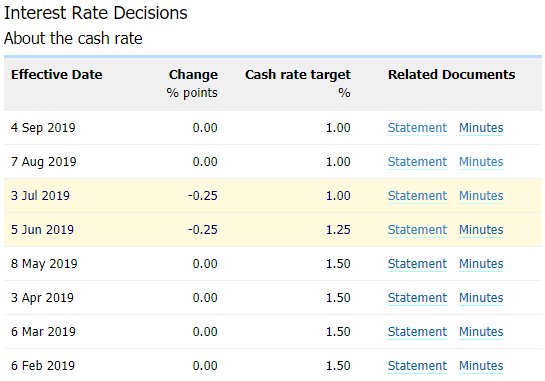 It seems as though the RBA will retain the current policy at the next meeting on October 1 as officials from China, Australia’s largest trading partner, try to nail out a trade deal with the Trump administration, but the central bank may continue to endorse a dovish forward guidance for monetary policy as officials retain their pledge to “ease monetary policy further if needed.”

In turn, Governor Philip Lowe may prepare Australian households and businesses for lower interest rates as the central bank head is scheduled to deliver a speech later this week, and hints of a more accommodative stance may drag on AUDUSD amid the growing dissent within the Federal Open Market Committee (FOMC).

With that said, the rebound from the monthly-low (0.6688) may continue to unravel over the coming days, with the exchange rate at risk of a further decline as it carves a series of lower highs and lows.