The price of gold extends the decline from the monthly-high ($1557) as US Treasury Secretary Steven Mnuchin insists the Trump administration is making “a lot of progress” in negotiating a trade deal with China, and recent price action points to a larger pullback as the precious metal continues to carve a series of lower highs and lows.

Gold prices remain under pressure as US Treasury yields recover from yearly lows, and the current environment may continue to drag on the price for bullion as China Premier Li Keqiang states that “we welcome enterprises from all over the world, including the United Sates, to expand economic and trade investment in China for win-win results.”

Signs of a looming US-China trade deal may continue to sap the appeal of gold as Vice Premier Liu He plans to visit the states next month, and it remains to be seen if the Federal Reserve will take additional steps to insulate the economy as President Donald Trump tweets “there is no recession.” 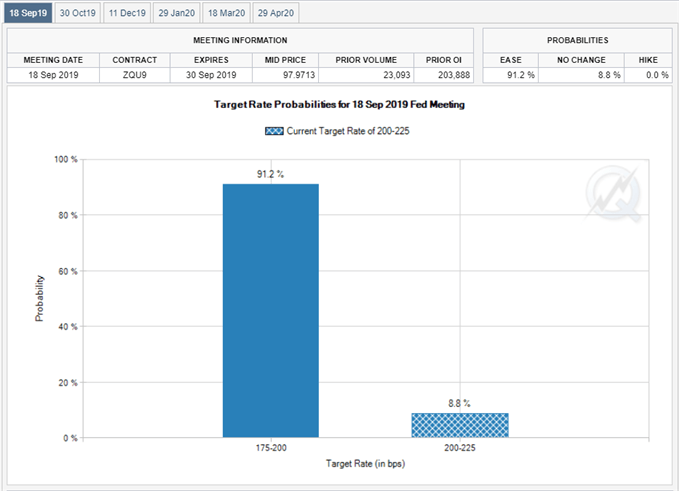 Keep in mind, Fed Fund futures still highlight overwhelming expectations for back-to-back rate cuts even though Chairman Jerome Powell asserts that the economic outlook remains “favorable,” and the ongoing shift in US trade policy may spur a growing dissent within the Federal Open Market Committee (FOMC) as St. Louis Fed President James Bullard, a 2019-voting member, argues that the central bank “should have a robust debate about moving 50 basis points” at its quarterly meeting scheduled for September 18.

With that said, the threat of a policy error may encourage market participants to hedge against fiat currencies, and the weakening outlook for global growth along with the inverting US yield curve are likely to keep gold prices afloat as there appears to be a flight to safety.

However, recent price action points to a larger pullback as the price for gold continues to carve a series of lower highs and lows, with the Relative Strength Index (RSI) snapping the bullish formation from earlier this year.