The price of gold climbs to a fresh yearly high ($1557) as there appears to be a growing dissent within the Federal Reserve, and the US-China trade war may continue to heighten the appeal of bullion as market participants search for an alternative to fiat currencies.

Gold prices may continue to benefit from the current environment amid the weakening outlook for global growth, and it seems as though China is in no rush to strike a trade deal with the Trump administration as the State Council pledges to “use both broad and targeted RRR (Reserve Requirement Ratio) cuts in a timely manner.”

Little indications of a looming US-China trade deal is likely to put increased pressure on the Fed to insulate the economy, but it remains to be seen if the Federal Open Market Committee (FOMC) will reverse the four rate hikes from 2018 as there appears to be a growing rift within the central bank.

Fresh remarks from New York Fed President John Williams suggest the central bank is not on a preset course as the permanent voting-member on the FOMC pledges to maintain a “data-dependent approach that takes into account the risks and uncertainty that are weighing on the economy.” 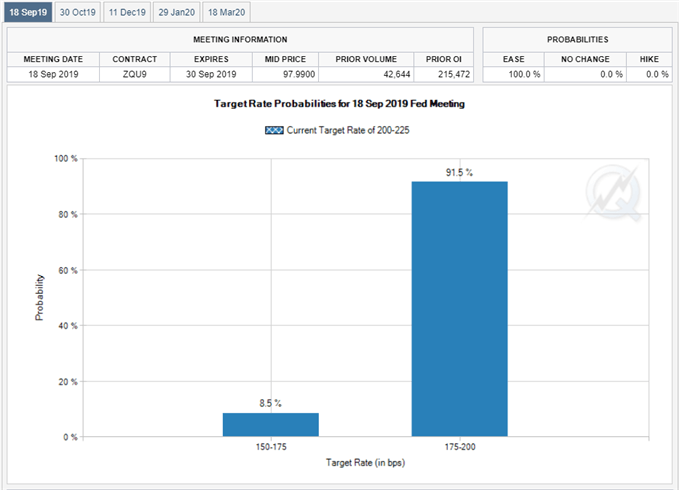 With that said, it remains to be seen if the FOMC will deliver back-to-back rate cuts as “the economy is in a good place,” but Fed Fund futures continue to reflect overwhelming expectations for a 25bp reduction on September 18 even though the Atlanta Fed GDPNow model projects the US economy to expand 2.3% in the third quarter of 2019 compared to 2.2% on August 16.

In turn, the threat of a policy error may push market participants to hedge against fiat currencies, and falling US Treasury yields along with the inverting yield curve are likely to keep gold prices afloat as there appears to be a flight to safety.