GBPUSD claws back from a fresh 2019-low (1.1958) as the UK House of Commons takes control of Parliament to avoid a no-deal Brexit, but the near-term outlook remains clouded with mixed signals as the Relative Strength Index (RSI) snaps the bullish formation from the previous month.

GBPUSD may stage a larger rebound over the coming days even though Prime Minister Boris Johnson prepares for a snap election as UK lawmakers take unprecedented steps to secure a trade deal.

With less than 60 days left until the October 31 deadline, headlines surrounding Brexit may continue to sway the outlook for GBPUSD, and it remains to be seen if the Bank of England (BoE) will adjust the forward guidance for monetary policy at the next meeting on September 19 as Governor Mark Carney insist that “the monetary policy response to No Deal would not be automatic.”

In turn, the BoE may continue to endorse a wait-and-see approach as “increased uncertainty about the nature of EU withdrawal means that the economy could follow a wide range of paths over coming years,” but the Monetary Policy Committee (MPC) may keep the door open to implement higher interest rates as the “central projection conditioned on prevailing asset prices and a smooth Brexit, GDP was projected to accelerate to robust growth rates from the second half of 2020.”

With that said, the BoE may ultimately stick to the same script, but retail sentiment remains skewed even though GBPUSD slips to a fresh yearly low during the first week of September. 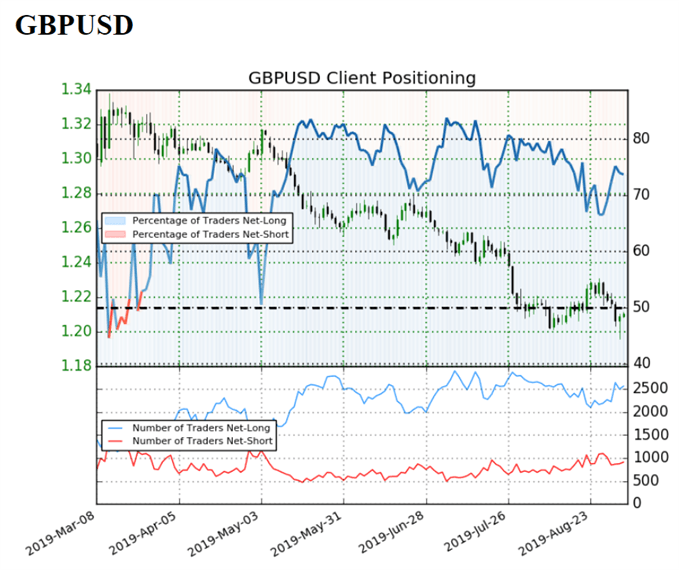 The IG Client Sentiment Report shows73.7%of traders are still net-long GBPUSD compared to 72.0% last week, with the ratio of traders long to short at 2.81 to 1.

In fact, traders have remained net-long since May 6 when GBPUSD traded near the 1.3100 handle even though price has moved 7.6% lower since then.The number of traders net-long is 3.2% lower than yesterday and 18.5% higher from last week, while the number of traders net-short is 3.8% higher than yesterday and 18.4% lower from last week.

The decline in net-short interest points to profit taking behavior as GBPUSD trades to a fresh yearly low in September, but the persistent tilt in retail position offers a contrarian view to crowd sentiment as the exchange rate continues to track the bearish trend from earlier this year.