The recent rebound in GBPUSD appears to be stalling as Bank of England (BoE) Governor Mark Carney strikes a cautious tone, but recent developments in the Relative Strength Index (RSI) foreshadow a larger correction in the exchange rate as the oscillator snaps the bearish trend from earlier this year.

GBPUSD pulls back from the monthly-high (1.2294) as Governor Carney warns that the risk of no-deal Brexit “has risen sharply,” with the central bank head going into say that “the appropriate policy path would be more likely to ease than not.”

In turn, a growing number of BoE officials may change their tune with less than 70 days until the October 31 deadline, and the Monetary Policy Committee (MPC) may show a greater willingness to switch gears later this year as “the UK economy contracted slightly last quarter and surveys point to stagnation in this one.” 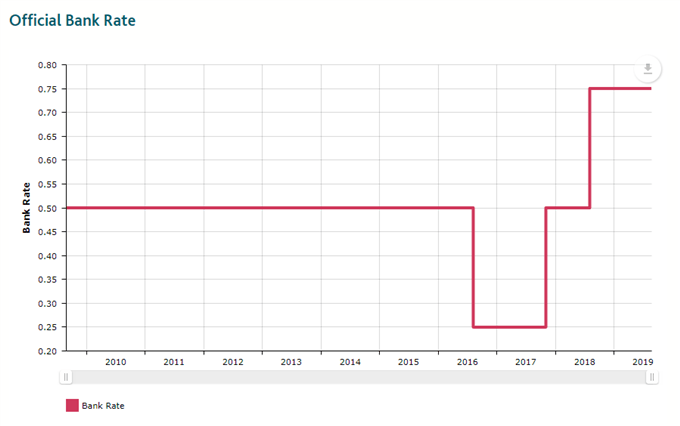 However, Mr. Carney reiterates that “the monetary policy response to No Deal would not be automatic,” and it seems as though the BoE will retain a wait-and-see approach at the next meeting on September 19 as “the UK economy could follow multiple possible paths depending on how Brexit progresses.”

It remains to be seen if the MPC will draw up a contingency plan to a no-deal Brexit as “global momentum remains soft,” but retail sentiment remains skewed during the last full week of August even though GBPUSD continues to track the bearish trend from earlier this year. 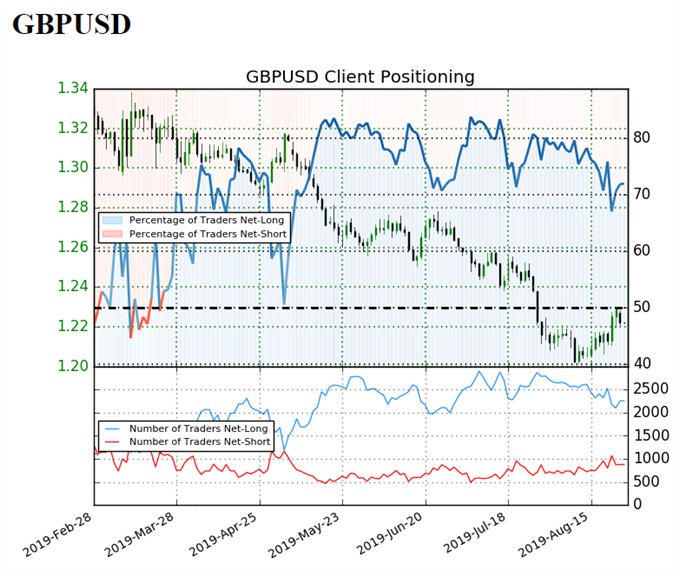 The IG Client Sentiment Report shows72.0%of traders are still net-long GBPUSD compared to 68.7% earlier this week, with the ratio of traders long to short at 2.57 to 1.

In fact, traders have remained net-long since May 6 when GBPUSD traded near the 1.3100 handle even though price has moved 6.8% lower since then.The number of traders net-long is 3.3% higher than yesterday and 6.5% lower from last week, while the number of traders net-short is 3.6% lower than yesterday and 5.5% higher from last week.

The drop in net-long position points to profit-taking behavior amid the recent rebound in GBPUSD, but the ongoing tilt in retail interest offers a contrarian view to crowd sentiment as the exchange rate continues to track the bearish trend from earlier this year.