USDCAD consolidates ahead of the Kansas City Fed Economic Symposium in Jackson Hole, Wyoming, and the advance from the August-low (1.3178) may continue to unravel as the Federal Open Market Committee (FOMC) comes under pressure to implement a rate easing cycle.

USDCAD pullbacks from a fresh monthly-high (1.3346) as Canada’s Consumer Price Index (CPI) comes in stronger-than-expected in July, with the headline reading for inflation holding steady at 2.0% for the second consecutive month.

Signs of sticky price growth should keep the Bank of Canada (BoC) on the sidelines as “growth in the second quarter appears to be stronger than predicted,” and Governor Stephen Poloz and Co. may continue to endorse a wait-and-see approach at the next meeting on September 4 as “recent data show the Canadian economy is returning to potential growth.”

In contrast, the FOMC is likely to face a different fate as President Donald Trump tweets that “the only problem we have is Jay Powell and the Fed,” and the central bank may come under increased pressure to reverse the four rate hikes from 2018 as the shift in trade policy clouds the outlook for the US economy.

In turn, the Federal Reserve may continue to alter the forward guidance for monetary policy, but it remains to be seen if Chairman Jerome Powell will make a major announcementahead of the next interest rate decision on September 18 as the central bank head is scheduled to deliver a speech at the economic symposium. 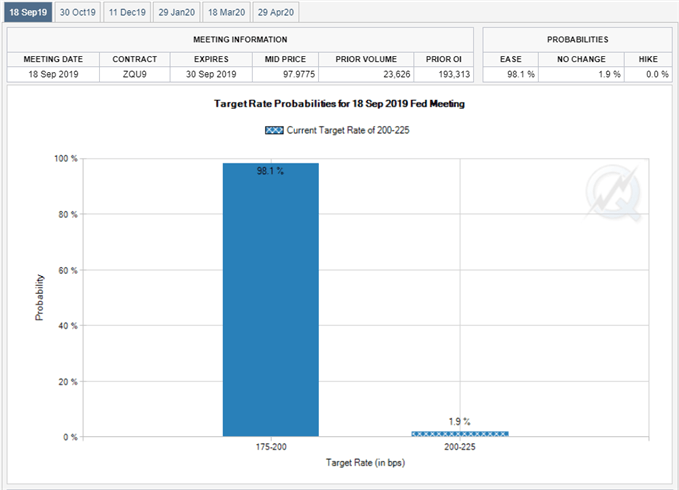 With that said, a batch of dovish comments is likely to produce headwinds for the US Dollar, with USDCAD at risk of exhibiting a more bearish behavior over the remainder of the month as Fed Fund futures still reflect overwhelming expectations for another 25bp rate cut in September.

However, recent comments from Boston Fed President Eric Rosengren, a 2019-voting member on the FOMC, suggest there’s a rift within the central bank, and a growing number of Fed officials may resist calls to implement a rate easing cycle as the US economy shows little evidence of a looming recession.

With that said, remarks coming out of the Fed symposium may sway the near-term outlook for USDCAD, but the advance from the August-low (1.3178) may continue to unravel amid the diverging paths for monetary policy.