The price of oil struggles to hold its ground even though US crude inventories contract for the first time in August, and the failed attempt to test the monthly-high ($57.99) raises the risk for a further decline as oil continues to track the downward trend from earlier this year.

The recent rebound in crude prices appear to have stalled despite the 2732K decline in US crude inventories amid the weakening outlook for future consumption.

A deeper look at the report showed gasoline inventories unexpectedly climbing 312K in the week ending August 16, with stockpiles of distillate fuel also increasing 2610K during the same period.

At the same time, US field production of crude oil sits near the record-high, with output holding steady at 12,300K for the third consecutive week. The data prints may push the Organization of the Petroleum Exporting Countries (OPEC) to curb production beyond 2019, and the group may take additional step to keep crude prices afloat as “world oil demand is projected to rise by 1.10 mb/d in 2019, showing a downward revision of 0.04 mb/d from the previous month’s projection.” 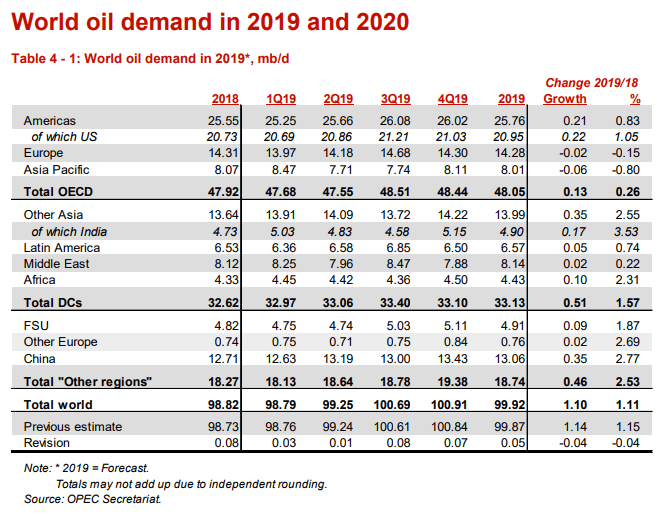 The most recent Monthly Oil Market Report (MOMR) warns of lower consumption “due to weaker-than-expected oil demand data from OECD Americas, Other Asia and the Middle East,” but it remains to be seen if OPEC and its allies will make a major announcement ahead of the next meeting on December 5 as the group insist that “for 2020, world oil demand is expected to grow by 1.14 mb/d, in line with last month’s projection.”

With that said, OPEC and its allies may stick to the status quo for the foreseeable future, but the lack of response may continue to drag on crude prices as the US and China, the two largest consumers of oil, struggle to reach a trade deal.

In turn, oil prices remain at risk of facing a bear market especially as a ‘death-cross’ formation takes shape in July.