GBPUSD attempts to retrace the decline from earlier this month even though the UK repeals the European Communities Act from 1972, and recent price action raises the scope for a larger correction as the Relative Strength Index (RSI) bounces back from oversold territory.

GBPUSD appears to be making a run at the monthly-high (1.2210) as Prime Minister Boris Johnson makes a formal appeal to the European Union (EU) to renegotiation the Brexit deal.

Efforts to avoid a no-deal Brexit should keep the British Pound afloat as it keeps the Bank of England (BoE) on track to further normalize monetary policy, and the central bank may stick to the same scrip at the next meeting on September 19 especially as US President Donald Trump looks to “move rapidly on a US-UK free trade deal.”

In turn, the Monetary Policy Committee (MPC) may reiterate that “increases in interest rates, at a gradual pace and to a limited extent, would be appropriate to return inflation sustainably to the 2% target,” and Governor Mark Carney and Co. may continue to prepare UK households and businesses for higher borrowing costs as “CPI inflation is projected to rise above the 2% target, as building excess demand leads to firmer domestic inflationary pressures.”

In turn, GBPUSD may stage a larger recovery over the coming days, but retail positions remains skewed even though the exchange rate continues to track the bearish trend from earlier this year. 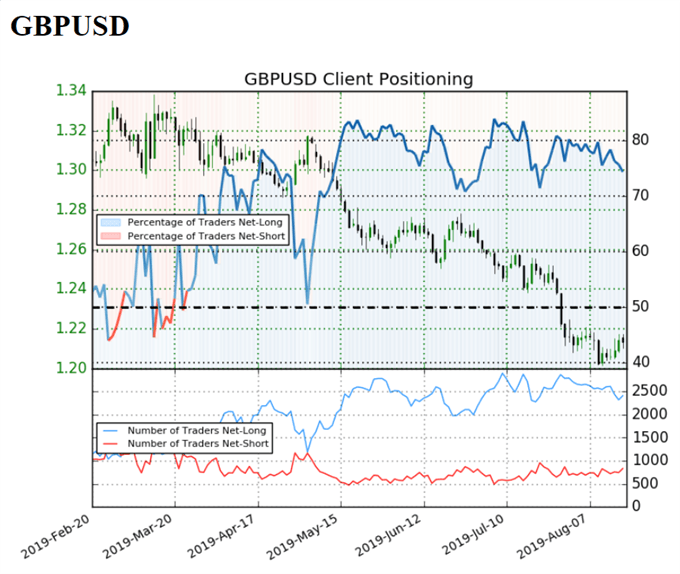 The IG Client Sentiment Report shows 74.3%of traders are still net-long GBPUSD compared to 81.2% at the end of July, with the ratio of traders long to short at 2.89 to 1.

The drop in net-long position is indicative of profit-taking behavior amid the recent rebound in GBPUSD, but the ongoing tilt in retail interest offers a contrarian view to crowd sentiment as both price and the Relative Strength Index (RSI) track the bearish trend from earlier this year.