AUDUSD trades in a narrow range following the Reserve Bank of Australia (RBA) Minutes, and the exchange rate may continue to consolidate over the remainder of the week as attention turns to the Kansas City Fed Economic Symposium in Jackson Hole, Wyoming.

The RBA Minutes failed to generated a meaningful reaction in AUDUSD even though the central bank keeps the door open to implement lower interest rates, and it seems as though the central bank will continue to endorse a dovish forward guidance as “members would consider a further easing of monetary policy if the accumulation of additional evidence suggested this was needed to support sustainable growth in the economy.”

In contrast, recent remarks from Boston Fed President Eric Rosengren, a 2019-voting member on the Federal Open Market Committee (FOMC), suggest the Federal Reserve is in no rush to embark on a rate easing cycle as the official insists that the central bank needs “to be careful not to ease too much when we don’t have significant problems.”

At the same time, San Francisco Fed President Mary Daly asserts that there’s little evidence of a looming recession as “the labor market is strong, consumer confidence is high, and consumer spending is healthy,” but the ongoing shift in US trade policy may spur a growing rift within the FOMC as the committee comes under pressure to reverse the four rate hikes from 2018. 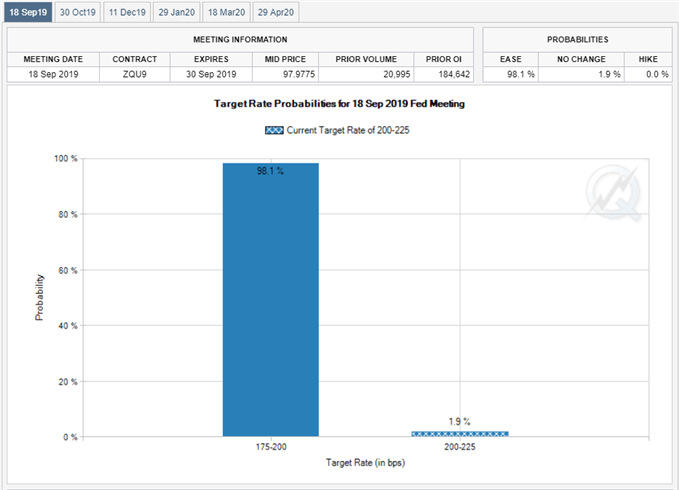 In fact, Fed Fund futures still highlight nearly a 100% probability for a 25bp reduction on September 18, and it remains to be seen if FOMC officials will make a major announcement ahead of the next meeting as Chairman Jerome Powell is scheduled to speak at the economic symposium.

In turn, the monthly range sits on the radar for AUDUSD, but the Australian dollar remains at risk of facing additional headwinds ahead of the next RBA meeting on September 3 as Governor Philip Lowe & Co. stand ready to further insulate the economy.