The price of gold stands at risk for a larger pullback as the Relative Strength Index (RSI) finally falls back from overbought territory, but current market conditions may keep the precious metal afloat as market participants look for an alternative to fiat currencies.

The near-term rally in gold appears to have stalled as the US delays the next tranche of China tariffs to December 15, and the price for bullion may continue to pullback from the yearly-high ($1535) as President Donald Trump tweets ‘we are doing very well with China and talking.”

Fears of a US-China trade war may continue to abate as the two regions reengage in negotiations, but little signs of a looming trade deal may push the Federal Open Market Committee (FOMC) to insulate the US economy as “weak global growth, trade policy uncertainty, and muted inflation have prompted the FOMC to adjust its assessment of the appropriate path of interest rates.”

It seems as though the Federal Reserve will continue to change its tune over the remainder of the year as the central bank pledges to “act as appropriate to sustain the expansion,” and the FOMC Minutes due out later this week may hint at a more accommodative stance as “many Committee participants saw that the case for lowering the federal funds rate had strengthened.” 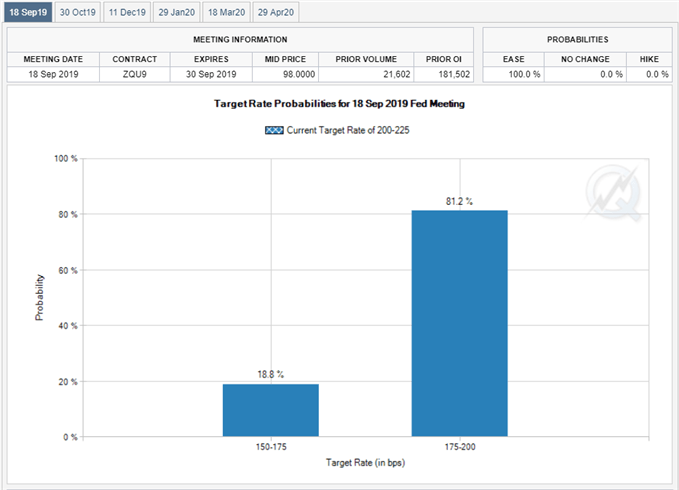 In turn, Fed Fund futures continue to reflect a 100% probably for at least a 25bp reduction at the next interest rate decision on September 18, and the FOMC may come under increased pressure to implement a rate easing cycle as President Trump insists that “the Fed is holding us back.”

With that said, falling US Treasury yields along with the inverting yield curve may push market participants to hedge against fiat currencies, and the risk of a policy error may keep gold prices afloat as there appears to be a flight to safety.