AUDUSD holds a narrow range following the 41.0K expansion in Australia Employment, and the Reserve Bank of Australia (RBA) Minutes may keep the exchange rate afloat should the central bank endorse a wait-and-see for monetary policy.

AUDUSD may attempt to extend the rebound from the yearly-low (0.6677) as fresh data prints coming out of Australia show little indications of a looming recession, and the RBA may adopt a less dovish tone ahead of the next meeting on September 3 as “the central scenario is for the Australian economy to grow by around 2½ per cent over 2019 and 2¾ per cent over 2020.’

The RBA Minutes may tame speculation for lower interest rates as the central bank insist that “the Australian economy can sustain lower rates of unemployment,” and Governor Philip Lowe & Co. may show a greater willingness to retain the current policy for the foreseeable future as “the outlook for the global economy remains reasonable.” 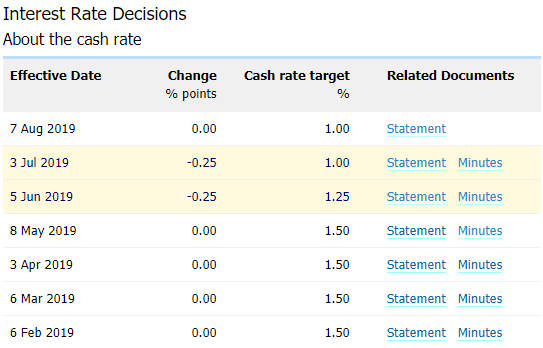 However, the RBA may keep the door open to further insulate the economy as the US and China, Australia’s largest trading partner, struggle to reach a trade deal, and the central bank may reiterate its pledge to “ease monetary policy further if needed” especially as the People’s Bank of China (PBoC) weaken the Yuan reference rate.

It remains to be seen if the US-China dispute will lead to a currency war as the PBOC insists that it “will not engage in competitive devaluation and will not use the exchange rate as a tool to deal with international trade disputes,” but fresh remarks from RBA Assistant GovernorChristopher Kent suggest the central bank will continue to utilize the official cash rate (OCR) to address the downside risks surrounding the region as “financial market prices currently imply that the cash rate is expected to be reduced by a further 25 basis points later this year and then again in the first half of next year.”

In turn, the RBA Minutes may produce headwinds for the Australian dollar, with AUDUSD at risk of facing a more bearish fate if the RBA prepares households and businesses for lower interest rates.