AUDUSD pares the advance from the monthly-low (0.6677) as the People’s Bank of China (PBoC) continues to weaken the Yuan reference rate, and current market conditions may continue to drag on the exchange rate amid the growing threat of a US-China trade war.

AUDUSD struggles to hold its ground amid little indications of an impending US-China trade deal, and it seems as though the PBOC will allow the Chinese Yuan to depreciate against its major counterparts as Deputy GovernorPan Gongsheng pledges to “implement a managed floating exchange rate system based on market supply and demand.”

It remains to be seen if the US-China feud will lead to a currency war as the PBOC insists that it “will not engage in competitive devaluation and will not use the exchange rate as a tool to deal with international trade disputes,” but the weakening outlook for the Asia/Pacific region may push the Reserve Bank of Australia (RBA) to further insulate the economy as Assistant GovernorChristopher Kent insist that “financial market prices currently imply that the cash rate is expected to be reduced by a further 25 basis points later this year and then again in the first half of next year.” 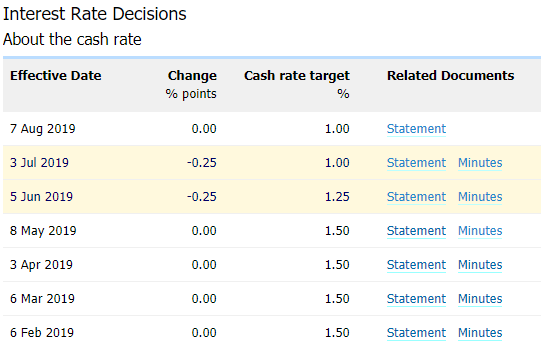 The comments suggest the RBA will continue to endorse a dovish forward guidance “with growth having slowed to a below-trend pace and inflation pressures subdued,” but it seems as though the central bank will stick to the sidelines at the next meeting on September 3 as Governor Philip Lowe warns that “there are certain downsides from relying too much on monetary policy.”

At the same time, updates to Australia’s Employment report may encourage Governor Lowe & Co. to retain a wait-and-see approach as the economy is anticipated to add 14.0K jobs in July, and signs of a resilient labor market may fuel a larger rebound in AUDUSD as it saps speculation for an imminent RBA rate cut.