The price of gold holds near the yearly-high ($1510) as the People’s Bank of China (PBoC) continues to weaken the Yuan reference rate, but the precious metal may face a larger pullback over the coming days as the Relative Strength Index (RSI) appears to be on the cusp of flashing a textbook sell signal.

Gold prices appear to be stuck in a narrow range even though US President Donald Trump tweets “China wants to make a deal” as the ongoing trade dispute instills a weakening outlook for global growth.

As a result, the Federal Reserve may continue to change its tune in 2019 as “incoming information on global growth, trade policy uncertainty, and muted inflation have led the Committee to gradually lower its assessments of the path of policy interest rate.” 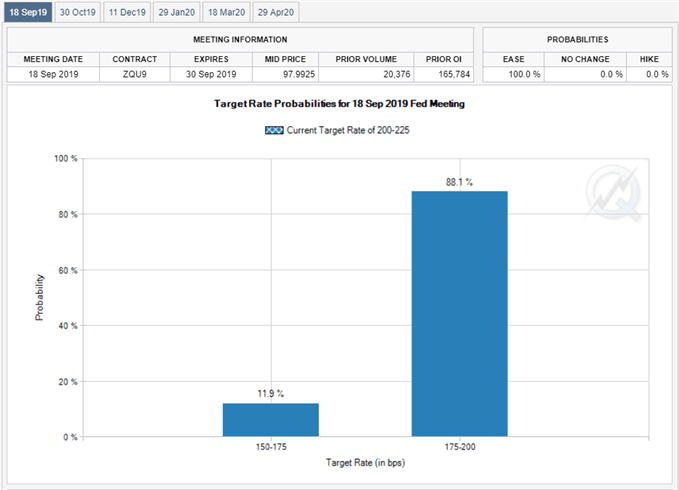 The comments suggest the Federal Open Market Committee (FOMC) will alter the forward guidance at the next interest rate decision on September 18 as the central bank updates the Summary of Economic Projections (SEP), and a growing number of Fed officials may forecast a lower trajectory for the benchmark interest rate as St. Louis Fed President James Bullard, a 2019-voting member on the FOMC, insists that “additional policy action may be desirable.”

It remains to be seen if the FOMC will deliver back-to-back rate cuts as “the Committee still sees a favorable baseline outlook,” but Fed Fund futures continue to reflect a 100% probability for at least a 25bp reduction in September, with the central bank likely to come under increased pressure to reverse the four rate hikes from 2018 especially as President Trump favors “a lengthy and aggressive rate-cutting cycle.”

With that said, the risk of a policy error may push market participants to hedge against fiat currencies, and the growing threat of a US-China trade war is likely to keepgold prices afloat as there appears to be a flight to safety.