The near-term rebound in USDCAD appears to have stalled ahead of Canada’s Employment report, and current themes surrounding financial markets may continue to drag on the exchange rate as the Federal Reserve comes under increased pressure to implement a rate easing cycle.

USDCAD pulls back from the monthly high (1.3345) as President Donald Trump tweets that “the Fed’s high interest rate level, in comparison to other countries, is keeping the dollar high,” and the Federal Open Market Committee (FOMC) may have little choice but to respond to the ongoing shift in trade policy as China weakens the Yuan reference rate.

Recent comments from St. Louis Fed President James Bullard, a 2019-voting member on the FOMC, suggest the central bank will continue to insulate the economy amid the growing threat of a US-China trade war, and the Fed may alter the forward guidance ahead of the next interest rate decision on September 18 on the back of growing expectations for an imminent rate cut. 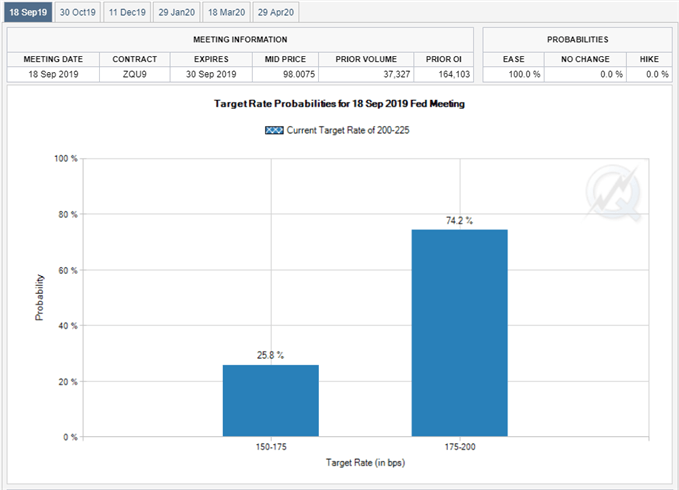 Fed Fund futures continue to reflect a 100% probability for at least a 25bp reduction in September, but it remains to be seen if Chairman Jerome Powell and Co. will reverse the four rate hikes from 2018 as “the Committee still sees a favorable baseline outlook.”

At the same time, fresh data prints out of Canada may drag on USDCAD as the economy is anticipated to add 15.0K jobs in July, with the Hourly Wage Rate expected to widen to 3.8% from 3.6% per annum in June. 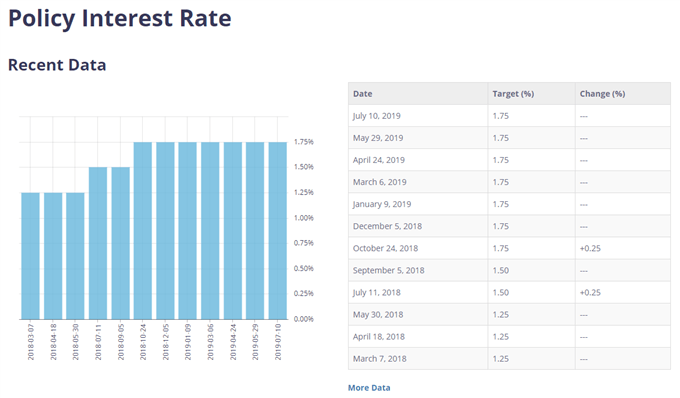 Signs of a robust labor market should keep the Bank of Canada (BoC) on the sidelines as “growth in the second quarter appears to be stronger than predicted,” and Governor Stephen Poloz and Co. may largely endorse a wait-and-see approach at the next meeting on September 4 as “recent data show the Canadian economy is returning to potential growth.”

With that said, the broader outlook for USDCAD remains mired by the diverging paths for monetary policy, and recent price action raises the risk for a further decline in the exchange rate as it carves a fresh series of lower highs and lows.