The price of oil slips to a fresh monthly-low ($50.52) following an unexpected pickup in US crude inventories, and the growing threat of a US-China trade war may continue to drag on energy prices amid the weakening outlook for consumption.

Crude faces a renewed threat of a bear market as it takes out the June-low ($50.60), and growing tensions between the US and China, the two largest consumers of oil, may become a growing concern for the Organization of the Petroleum Exporting Countries (OPEC) as the group pledges to regulate the energy market throughout 2019.

Fresh updates from the US Energy Information Administration (EIA) showed crude inventories unexpectedly increasing for the first time in eight weeks, with stockpiles climbing 2385K in the week ending August 2. A deeper look at the report showed gasoline inventories increasing 4437K during the same period, with stockpiles of distillate fuel expanding 1529K.

In response, OPEC and its allies may discuss additional measures to balance the energy market, but it remains to be seen if the group will continue to curb production ahead of the next meeting on December 5 as the most recent Monthly Oil Market Report (MOMR) states that “in 2019, the global oil demand growth forecast remains at 1.14mb/d, with expectations for global oil demand to reach 99.87 mb/d.” 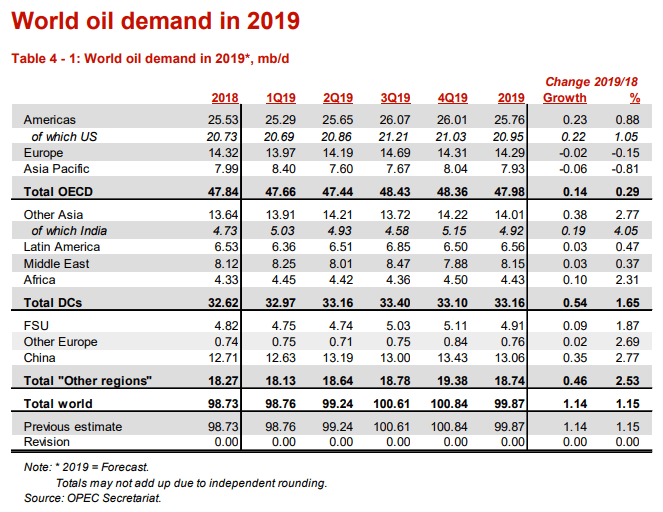 The projection suggests OPEC and its allies are in no rush to further reduce crude production as “the non-OECD region is expected to continue leading oil demand growth in 2020,” and the lack of response is likely to keep crude prices under pressure as the threat of a US-China trade war dampens the outlook for consumption.

With that said, oil prices remain at risk of facing a bear market over the coming months especially as a ‘death-cross’ formation takes shape in July.