The near-term rebound in USDCAD appears to have stalled ahead of the Federal Reserve interest rate decision, and the exchange rate may continue to give back the advance from the monthly-low (1.3016) as it initiates a fresh series of lower highs and lows.

USDCAD stands at risk of facing a more bearish fate over the next 24-hours of trade as the Federal Open Market Committee (FOMC) is widely expected to alter the path for monetary policy.

The FOMC appears to be on track to deliver an insurance cut in July as “participants generally agreed that downside risks to the outlook for economic activity had risen materially since their May meeting, particularly those associated with ongoing trade negotiations and slowing economic growth abroad.” 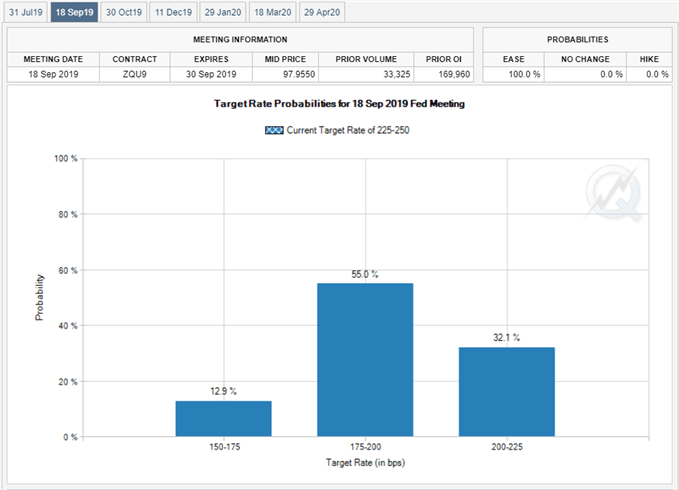 It seems as though the FOMC will insulate the US economy from the shift in trade policy, but it remains to be seen if Chairman Jerome Powell and Co. will establish a rate easing cycle as Fed Fund futures still highlight a greater than 60% probability for another reduction at the September 18 interest rate decision.

With that said, the Fed’s forward guidance for monetary policy is likely to influence the near-term outlook for USDCAD, and the exchange rate may exhibit a more bearish behavior over the coming days if the FOMC shows a greater willingness to reverse the four rate hikes from 2018.

In contrast, the Bank of Canada (BoC) may face a different fate as “growth in the second quarter appears to be stronger than predicted,” and Governor Stephen Poloz and Co. looks poised to keep the benchmark interest rate on hold at the next meeting on September 4 as “the degree of accommodation being provided by the current policy interest rate remains appropriate.”

In turn, the diverging paths for monetary policy casts a bearish outlook for USDCAD, with the exchange rate at risk of giving back the advance from the monthly-low (1.3016) as it carves a fresh series of lower highs and lows.