GBPUSD tumbles to a fresh yearly low (1.2156) ahead of the Bank of England (BoE) meeting on August 1, and current market conditions may produce a further decline in the exchange rate as retail position remains stretched, while the Relative Strength Index (RSI) pushes into oversold territory.

The British Pound extends the decline from earlier this week as Prime Minister Boris Johnson pushes for new Brexit deal, with spokeswoman Alison Donnelly insisting that “the prime minister will be happy to sit down with leaders when that position changes.”

The comments suggest the new prime minister is in no rush to meet with European Union (EU) leaders even though there’s less than 100 days left till the October 31 deadline, and headlines surrounding Brexit may continue to shake up the near-term outlook for the British Pound especially as Nicola Sturgeon, the First Minister of Scotland, warns that Mr. Johnson “is really pursuing a no-deal Brexit because that is the logic of the hardline position that he has taken.”

The growing threat of a no-deal Brexit may push the BoE to alter the forward guidance as “the economic outlook will continue to depend significantly on the nature and timing of EU withdrawal,” and the updates to the quarterly inflation report (QIR) may highlight a different path for monetary policy as the current assessment is based on the “assumption of a smooth Brexit.”

In turn, the Monetary Policy Committee (MPC) may adopt a dovish tone as “underlying growth in the United Kingdom appears to have weakened slightly in the first half of the year relative to 2018,” and Governor Mark Carney and Co. may prepare UK households and businesses for lower interest rates as the central bank warns “downside risks to growth have increased.”

A downward revision in the BoE’s economic projections along with a material shift in the MPC’s forward guidance is likely to produce headwinds for the British Pound, but retail positions remains skewed even though GBPUSD trades to fresh yearly lows. 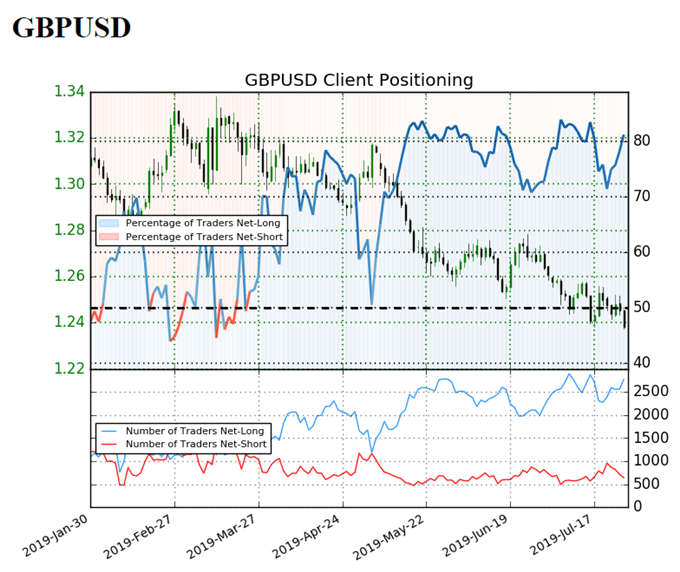 The IG Client Sentiment Report shows81.2%of traders are still net-long GBPUSD compared to 78.0% last week, with the ratio of traders long to short at 4.31 to 1.

The drop in net-short position points to profit-taking behavior as GBP/USD trades to fresh 2019 lows, but the ongoing tilt in net-long position offers a contrarian view to crowd sentiment as the exchange rate tracks a bearish trend, with the Relative Strength Index (RSI) highlighting a similar dynamic.