EURCHF Rate Trades to Fresh 2019 Low Ahead of ECB Meeting

EURCHF trades to a fresh yearly-low (1.0965) ahead of the European Central Bank (ECB) meeting, and recent price action warns of a further decline in the exchange rate as the Relative Strength Index (RSI) pushes into oversold territory.

EURCHF Rate Trades to Fresh 2019 Low Ahead of ECB Meeting

The ECB meeting may keep EURCHF under pressure even though the central bank is widely expected to keep Euro area interest rates on hold as the Governing Council endorses a dovish forward guidance for monetary policy.

Recent remarks from ECB officials suggest the central bank will take additional steps to insulate the monetary union as the account of the June meeting insists that “the Governing Council needed to be ready and prepared to ease the monetary policy stance further by adjusting all of its instruments, as appropriate, to achieve its price stability objective.” 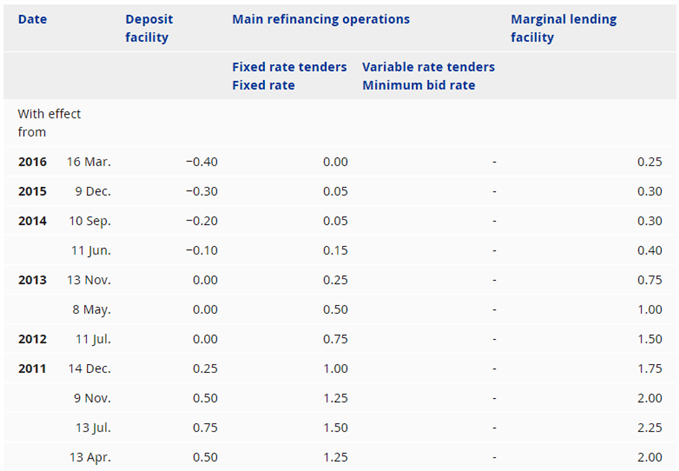 It seems as though the ECB will continue to utilize its non-standard measures as the central bank prepares to launch another round of Targeted Long-Term Refinance Operations (TLTRO) in September, and the Governing Council may show a greater willingness to implement a negative interest rate policy (NIRP) for the Main Refinance Rate, its flagship benchmark for borrowing costs, as “weak global trade and the prolonged presence of uncertainties continued to be a drag on euro area growth developments.”

With that said, the Swiss National Bank (SNB) may find itself in a similar situation as the central bank warns that “an unexpectedly sharp slowdown internationally would quickly spread to Switzerland.”

As a result, Chairman Thomas Jordan and Co. may gain increased attention as the central bank insists that “the negative interest rate and the SNB’s willingness to intervene in the foreign exchange market as necessary remain essential in order to keep the attractiveness of Swiss franc investments low and thus ease pressure on the currency.”

However, the lingering threat of a trade war may continue to drag on EURCHF, and the SNB’s policy may do little to curb the appreciation in the Swiss Franc as there appears to be a flight to safety.

In turn, EURCHF may continue to trade to fresh yearly lows over the coming days, with the exchange rate at risk of extending the recent series of lower highs and lows as recent developments in the Relative Strength Index (RSI) suggest the bearish momentum is gathering pace.