USDCAD takes out the opening range for July, with the exchange rate climbing to a fresh monthly high (1.3164), and current market conditions may keep Dollar Loonie afloat as US lawmakers take steps to avoid the debt ceiling.

USDCAD breaks out of a narrow range as Congress reaches a two-year budget deal, and the narrowing threat of a government shutdown may fuel a larger rebound ahead of the Federal Reserve interest rate decision on July 31 as it boosts bets for an “insurance cut.” 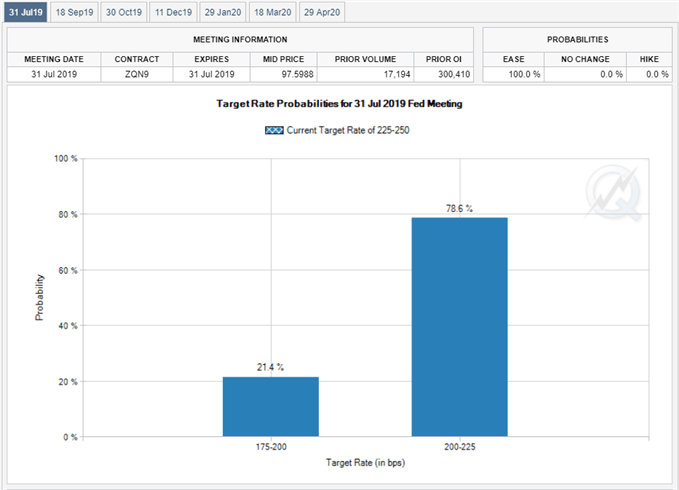 Recent remarks from the Federal Open Market Committee (FOMC) suggest the central bank will insulate the US economy from the shift in trade policy, with Fed Fund futures still highlighting a 100% probability for at least a 25bp rate cut as “participants generally agreed that downside risks to the outlook for economic activity had risen materially since their May meeting, particularly those associated with ongoing trade negotiations and slowing economic growth abroad.”

In turn, the Fed may continue to change its tune over the coming months amid limited signs of an imminent US-China trade deal, and the central bank may come under increased pressure to reverse the four rate hikes from 2018 especially as President Donald Trump tweets that “it is far more costly for the Federal Reserve to cut deeper if the economy actually does, in the future, turn down.”

However, it remains to be seen if Chairman Jerome Powell and Co. will establish a rate easing cycle as there appears to be dissenting views within the FOMC, and the central bank may ultimately revert back to a wait-and-see approach as Fed officials “expect growth in the United States to remain solid, labor markets to stay strong, and inflation to move back up and run near 2 percent.”

As a result, the Fed’s forward guidance may largely influence the broader outlook for USDCAD especially as the Bank of Canada (BoC) sticks to the sidelines, with USDCAD at risk of exhibiting a more bearish behavior if the FOMC shows a greater willingness to implement lower interest rates throughout the second half of 2019.

Nevertheless, recent price action warns of a larger rebound as USDCAD breaks out of the monthly opening range, with the recent series of higher highs and lows in the exchange rate bringing the topside targets on the radar.