GBPUSD appears to be on track to test the monthly-low (1.2382) amid the slew of resignations within the Conservative Party, and the British Pound stands at risk of facing additional headwinds amid the threat of a no-deal Brexit.

The British Pound is under pressure as the leadership contest draws to an end, and the change in regime may continue to drag on GBPUSD as Boris Johnson pledges to depart from the European Union (EU) no later than the October 31 deadline regardless of the outcome.

The threat of a no-deal Brexit may force the Bank of England (BoE) to change its tune as Chief Economist Andrew Haldane warns that the UK is “in a situation of quite considerable uncertainty,” and a growing number of central bank officials may show a greater willingness to abandon the rate hiking cycle as “underlying growth in the United Kingdom appeared to have weakened slightly in the first half of the year relative to 2018 to a rate a little below its potential.” 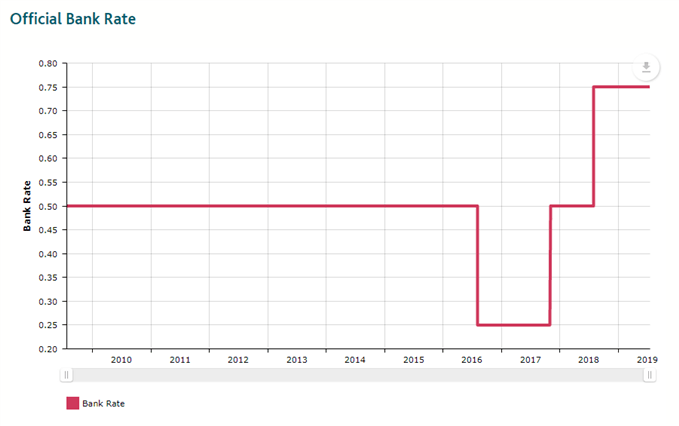 In turn, the Monetary Policy Committee (MPC) may alter the forward guidance at the next meeting on August 1 as the central bank updates its quarterly inflation report (QIR), and Governor Mark Carney and Co. may come under pressure to switch gears later this year as the current path for monetary policy hinges on “an assumption of a smooth Brexit.”

With that said, the British Pound stands at risk of facing a more bearish fate over the near-term, but retail sentiment remains skewed even though GBPUSD falls back towards the monthly-low (1.2382). 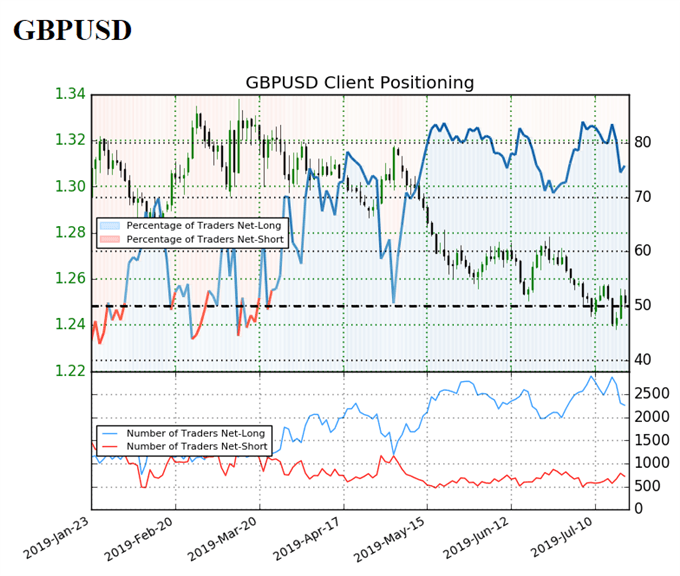 The IG Client Sentiment Report shows 75.8% of traders are still net-long GBPUSD compared to 79.9% last week, with the ratio of traders long to short at 3.13 to 1.In fact, traders have remained net-long since May 6 when GBPUSD traded near the 1.3100 handle even though price has moved 4.9% lower since then.

The number of traders net-long is 3.3% lower than yesterday and 12.2% lower from last week, while the number of traders net-short is 13.1% lower than yesterday and 5.5% higher from last week. Keep in mind, net-long positions have recently pulled back from an extreme reading, but net-short interest may pick up over the coming days as GBPUSD appears to be on track to test the monthly-low (1.2382).

The ongoing tilt in retail interest offers a contrarian view to crowd sentiment as GBP/USD tracks a bearish trend, with the Relative Strength Index (RSI) highlighting a similar dynamic.