AUDUSD Forecast: Will the 200-Day SMA Continue to Offer Resistance?

AUDUSD continues to pullback from the monthly-high (0.7082) amid little indications of a US-China trade deal, and the near-term rebound appears to have stalled ahead of the 200-Day SMA (0.7090) as the exchange rate fails to extend the recent string of higher highs and lows.

AUDUSD Forecast: Will the 200-Day SMA Continue to Offer Resistance?

AUDUSD cleared the May-high (0.7061) on the back of growing expectations for a Federal Reserve rate cut, and it seems as though the Federal Open Market Committee (FOMC) will alter the course for monetary policy at the next interest rate decision on July 31 as the “apparent progress on trade turned to greater uncertainty.”

It remains to be seen if the Fed will reverse the four rate hikes from 2018 amid the mixed views within the FOMC, but the central bank may have little choice but to insulate the US economy from the shift in trade policy as Chairman Jerome Powell pledges to “act as appropriate to sustain the expansion, with a strong labor market and inflation near its symmetric 2 percent objective.” 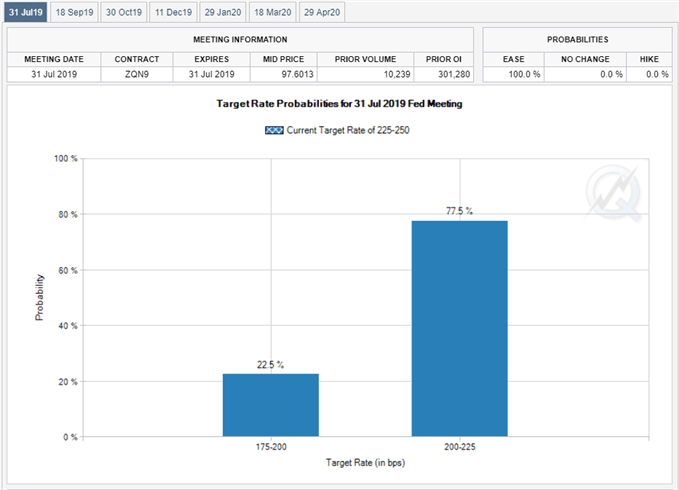 There seems to be little indications of an imminent US-China trade deal especially as President Donald Trump tweets that it’s “very unfair that other countries manipulate their currencies,” and the FOMC may ultimately deliver an “insurance cut” as Fed Fund futures highlight overwhelming expectations for at least a 25bp reduction.

In contrast, the Reserve Bank of Australia (RBA) may endorse a wait-and-see approach at the next meeting on August 6 after implementing back-to-back rate cuts, and the looming change in US monetary policy may largely influence the broader outlook for the Aussie Dollar exchange rate as President Trump insists that “the Fed raised & tightened far too much & too fast.”

Keep in mind, the AUDUSD rebound following the currency market flash-crash has been capped by the 200-Day SMA (0.7090), with the exchange rate marking another failed attempt to break/close above the moving average in April.

With that said, AUDUSD may face a larger pullback ahead of the Fed interest rate decision as the exchange rate fails to extend the recent string of higher highs and lows.