USDCAD extends the rebound from the 2019-low (1.3018) even though Federal Reserve Chairman Jerome Powell reinforces expectations for an imminent change in monetary policy, and the exchange rate may stage a larger rebound over the coming days as it carves a fresh series of higher highs and lows.

The near-term decline in USDCAD appears to have stalled ahead of the Federal Reserve interest rate decision on July 31, but the exchange rate may exhibit a more bearish behavior in the second half of 2019 as the Federal Open Market Committee (FOMC) is widely expected to reduce the benchmark interest rate from its current threshold of 2.25% to 2.50%. 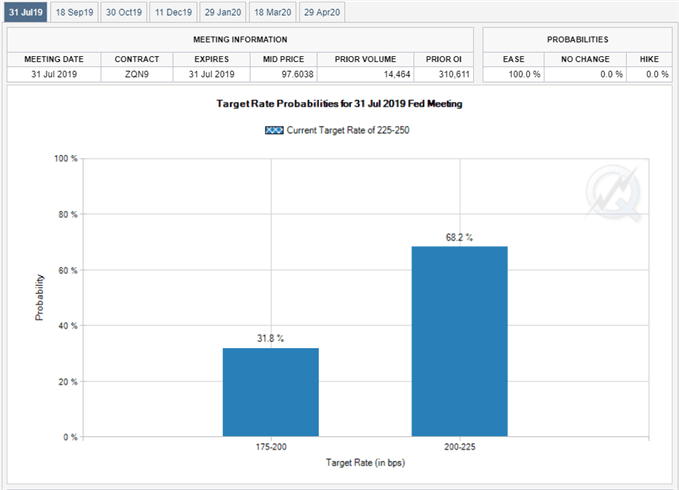 Fed Fund futures continue to highlight a 100% probability for at least a 25bp reduction as the FOMC minutes from the June meeting states that “many participants indicated that the case for somewhat more accommodative policy had strengthened.”

In fact, a growing number of Fed officials may project a lower trajectory for the benchmark interest rate as the central bank comes under pressure to reverse the four rate hikes from 2018, and the FOMC may adopt a more dovish tone over the coming months as “participants generally agreed that downside risks to the outlook for economic activity had risen materially since their May meeting, particularly those associated with ongoing trade negotiations and slowing economic growth abroad.”

However, the Bank of Canada (BoC) is likely to face a different fate as “growth in the second quarter appears to be stronger than predicted,” and the central bank may have little choice but to retain the current policy at the next meeting on September 4 as “recent data show the Canadian economy is returning to potential growth.”

Keep in mind, updates to Canada’s Consumer Price Index (CPI) may spark a bearish reaction in the Canadian Dollar as the gauge is expected to narrow to 2.0% from 2.4% per annum in May, but a one-off downtick in the headline reading for inflation may do little to alter the monetary policy outlook as Governor Stephen Poloz and Co. insist that “CPI inflation will likely dip this year because of the dynamics of gasoline prices and some other temporary factors.”

As a result, the diverging paths for monetary policy may fuel a further shift in USDCAD behavior, with the broader outlook tilted to the downside as the exchange rate snaps the bullish trend from earlier this year.