AUDUSD appears to be making another run at the May-high (0.7061) as the exchange rate extends the series of higher highs and lows from the previous week, and the Reserve Bank of Australia (RBA) Minutes may fuel the recent rebound in the Australian Dollar should the central bank tame speculation for another rate cut in 2019.

AUDUSD extends the rebound from the monthly-low (0.6911) even though China, Australia’s largest trading partner, marks the slowest pace of growth since record keeping began in 1992, and the current environment may keep the exchange rate afloat as the Federal Reserve is widely expected to deliver an “insurance cut” at the next interest rate decision on July 31. 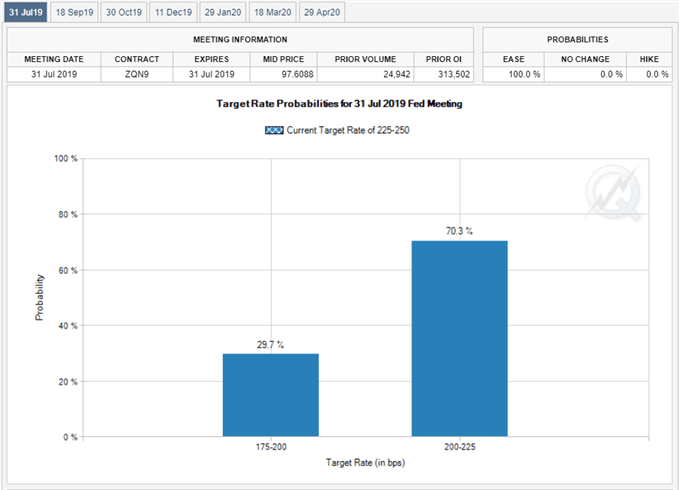 The Federal Open Market Committee (FOMC) appears to be on track to insulate the US economy as “many participants indicated that the case for somewhat more accommodative policy had strengthened,” and the US Dollar may face a more bearish fate over the coming days as Fed Fund futures show a 100% probability for at least a 25bp reduction in the benchmark interest rate.

In contrast, the RBA may show a greater willingness to revert back to a wait-and-see approach after delivering two consecutive rate cuts, and the central bank may strike a more balanced tone ahead of next meeting on August 7 as “the central scenario for the Australian economy remains reasonable.” 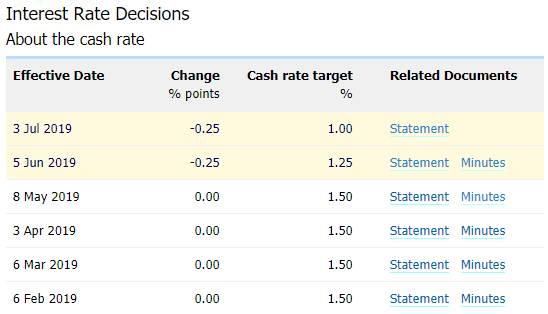 Keep in mind, the RBA is likely to reiterate its pledge to “adjust monetary policy if needed” as the US and China struggle to reach a trade deal, but it seems as though the central bank is in no rush to extend its rate easing cycle as “the central scenario remains for underlying inflation to be around 2 per cent in 2020 and a little higher after that.”

As a result, the RBA minutes from the July meeting may ultimately fuel the recent rebound in AUDUSD, with the exchange rate at risk of making another run at the May-high (0.7061) should Governor Philip Lowe and Co. soften the dovish forward guidance for monetary policy.