USDCAD attempts to retrace the decline from June as employment in Canada unexpectedly contracts for the second time in 2019, and recent price action raises the risk for a larger rebound as the exchange rate snaps the string of lower highs and lows from the previous week.

USDCAD extends the rebound from the fresh yearly-low (1.3037) as Canada employment contracts 2.2K in June, but the data may do little to impact the monetary policy outlook as the details of the report point to a resilient labor market.

A deeper look at the report showed the weakness was led by a 26.2K contraction in part-time jobs, which was offset by a 24.1K expansion in full-time employment, while the Hourly Wage Rate climbed to 3.6% from 2.6% in May to mark the highest reading since 2018.

The underlying strength in the labor market should keep the Bank of Canada (BoC) on the sidelines, with the central bank widely expected to hold the benchmark interest rate at 1.75% on July 10 as officials insist that “the slowdown in late 2018 and early 2019 is being followed by a pickup starting in the second quarter.” 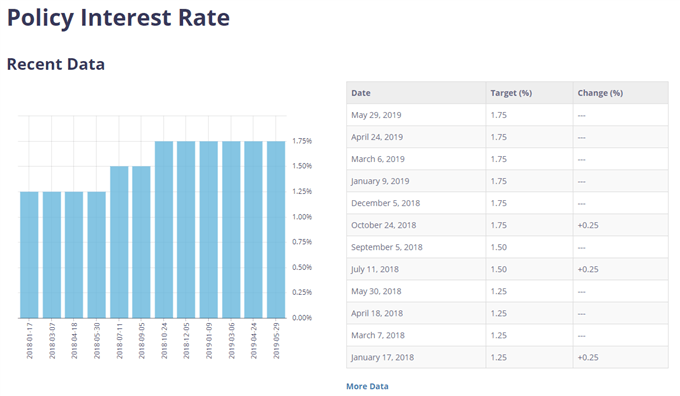 In turn, Governor Stephen Poloz and Co. may largely endorse a wait-and-see approach for monetary policy, and it seems as though the BoC will take a different path compared to the Federal Reserve as the Canadian economy appears to be outperforming its US counterpart.

With that said, more of the same from the BoC may continue to drag on USDCAD, with the exchange rate at risk of exhibiting a more bearish behavior over the remainder of 2019 as it snaps the upward trend from earlier this year.

However, recent price action raises the risk for a near-term rebound in USDCAD as the exchange rate snaps the series of lower highs and lows from the previous week, while the Relative Strength Index (RSI) marks a failed attempt to push into oversold territory.