Gold attempts to retrace the decline following the US Non-Farms Payroll (NFP) report, but the price of bullion may face a larger pullback ahead of the semi-annual testimony with Federal Reserve Chairman Jerome Powell as the bullish momentum abates.

The recent rebound in the price of gold appears to be have stalled ahead of the yearly-high ($1439), and the precious metal stands at risk for a larger correction as fresh data prints coming out of the US economy deter bets for a rate easing cycle.

The 224K expansion in US employment undermines the shift in forward guidanceas the economy shows little signs of a looming recession, and the development may generate a growing dissent within the Federal Open Market Committee (FOMC) as “the baseline outlook remains favorable.”

In turn, market participants may pay increased attention to the semi-annual testimony with Chairman Powell as “many FOMC participants now see that the case for a somewhat more accommodative policy has strengthened,” and recent remarks from the 2019-voting members suggest the central bank is on track to implement an “insurance cut” as the US and China struggle to reach a trade deal. 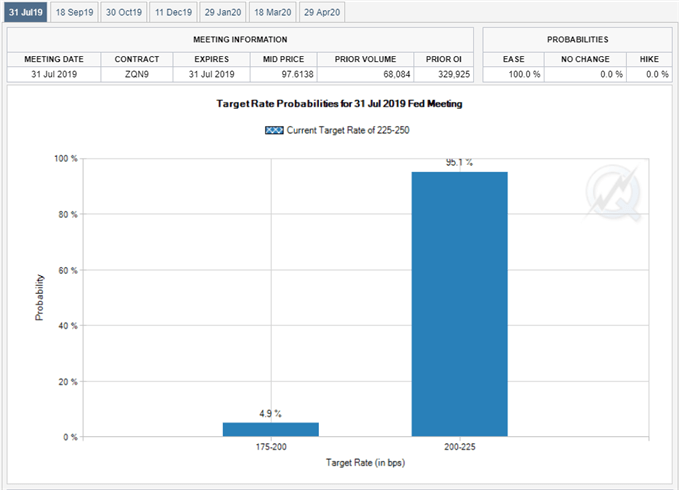 Keep in mind, Fed Fund futures continue to reflect a 100% probability for at least a 25bp reduction at the next interest rate decision on July 31, but it remains to be seen if the FOMC will reverse the four rate hikes from 2018 as eight Fed officials project a lower trajectory for the benchmark interest rate.

With that said, upcoming changes at the Federal Reserve should keep gold prices afloat amid the threat of a policy error, and the precious metal stands at risk of exhibiting a more bullish behavior in the second half of 2019 especially as President Donald Trump tweets “we need rates cuts, & easing.”

However, recent price action raises the risk for a larger pullback as the rebound from the start of the month fails to spur a run at the yearly-high ($1439), with the Relative Strength Index (RSI) highlighting a similar dynamic as the oscillator falls back from overbought territory.