The recent breakout in the price of gold appears to have stalled ahead of the 2019-high ($1347), but the current environment may keep the precious metal afloat as the Relative Strength Index (RSI) pushes into overbought territory.

Gold rallies to a fresh weekly high ($1344) despite a rebound in global equity prices, and developments coming out of the U.S. economy may continue to sway the near-term outlook for bullion as Federal Reserve officials change their tune.

The unexpected uptick in the ISM Non-Manufacturing survey has tamed the recent advance in gold as the index climbs to 56.9 from 55.5 in April, and little to no signs of an imminent recession may encourage the Federal Open Market Committee (FOMC) to retain a wait-and-see approach as the Beige Book notes that “economic activity expanded at a modest pace overall from April through mid-May, a slight improvement over the previous period.”

However, the ADP Employment survey does not bode well for the highly anticipated Non-Farm Payrolls (NFP) report as the gauge shows a 27K expansion versus expectations for a 185K rise, and signs of slowing job growth may heighten the appeal of gold as it puts pressure on the FOMC to alter the forward guidance for monetary policy. 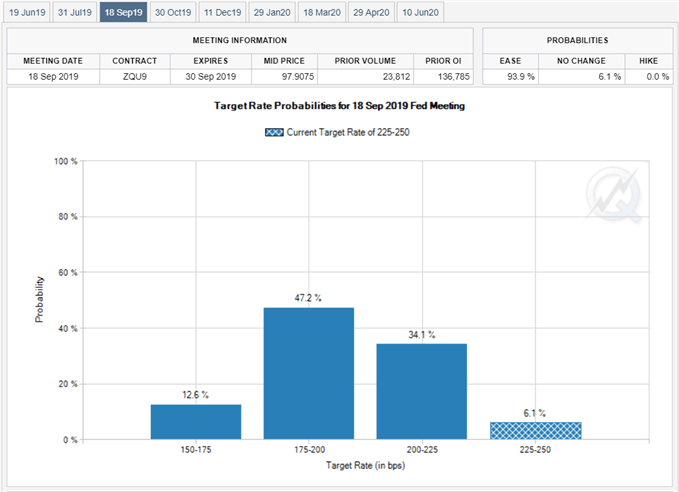 There appears to be growing speculation the FOMC will change gears sooner rather than later, with Fed Fund futures now showing a greater than 90% probability for a September rate-cut, and it seems as though the central bank will respond to the shift in U.S. trade policy as Chairman Jerome Powell insists that the committee “will act as appropriate to sustain the expansion.”

In turn, it remains to be seen if Fed officials will project a lower trajectory for the benchmark interest rate as Chairman Powell & Co. are slated to update the Summary of Economic Projections (SEP), and the weakening outlook for global growth may keep gold prices afloat ahead of the FOMC rate decision on June 19 as there appears to be a flight to safety. 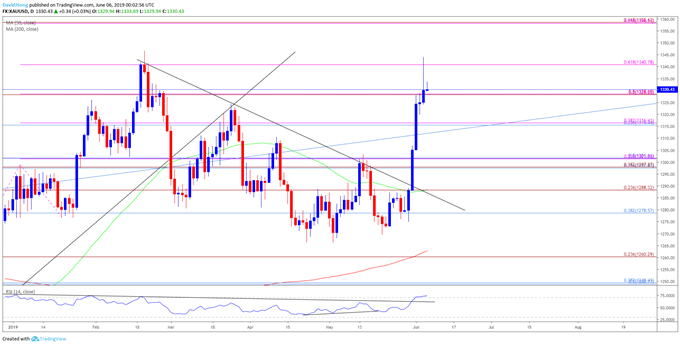