AUD/USD stands at risk of facing range-bound conditions over the remainder of the month as the Aussie Dollar exchange rate struggles to extend the series of higher highs & lows from the previous week.

AUD/USD attempts to retrace the decline following the Reserve Bank of Australia (RBA) Minutes as the bearish momentum abates, and the exchange rate may continue to consolidate ahead of the next meeting on June 4 as the central bank insists that ‘a further decline in the unemployment rate would be consistent with achieving Australia's medium-term inflation target.’

The most recent update to Australia’s Employment report showed the jobless rate unexpectedly climbing to 5.2% from a revised 5.1% in March, but the move appears to be driven by discouraged workers returning to the labor force as the Participation Rate expands to 65.8% from 65.7% per annum during the same period. In turn, the ongoing improvement in the labor market may keep the RBA on the sidelines as the central bank pledges to ‘pay close attention to developments in the labour market and set monetary policy to support sustainable growth in the economy and achieve the inflation target over time.’

However, the RBA may continue to change its tune over the coming months as Governor Philip Lowe & Co. warn that ‘without an easing in monetary policy over the next six months, growth and inflation outcomes would be expected to be less favourable than the central scenario.’

In turn, the RBA may show a greater willingness to reestablish its rate easing cycle as ‘the risks to the global economy remained tilted to the downside,’ and the Australian dollar stands at risk of facing headwinds over the coming months amid growing speculation for lower interest rates.

Nevertheless, the rebound in AUD/USD appears to be shaking up market participation, with retail sentiment coming off an extreme reading. 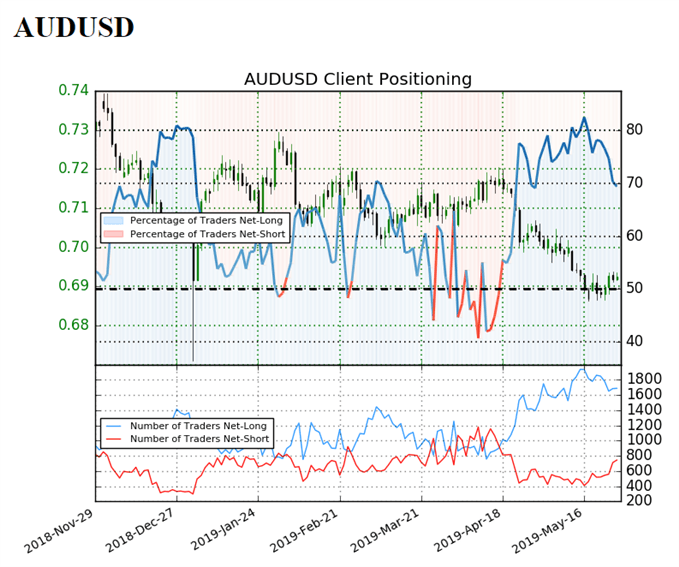 The IG Client Sentiment Report shows 69.4% of traders are now net-long AUD/USD compared to 75.1% last week, with the ratio of traders long to short at 2.27 to 1. In fact, traders have been net-long since April 18 when AUD/USD traded near 0.7160 even though price has moved 3.4% lower since then.

The number of traders net-long is 1.4% higher than yesterday and 9.4% lower from last week, while the number of traders net-short is 2.8% higher than yesterday and 47.9% higher from last week. The ongoing tilt in the sentiment index offers a contrarian view as AUD/USD tracks the bearish trend from late last year, but the recent rise in net-short position suggests the retail crowd is positioning for range-bound conditions as the Aussie Dollar exchange rate fails to extend the series of higher highs and lows from the previous week. 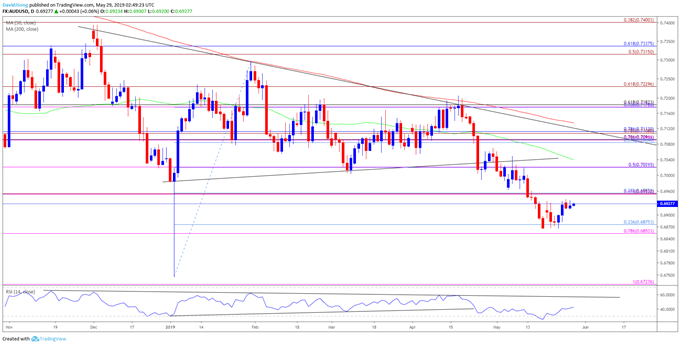