Crude pulls back from a fresh yearly-high ($64.79) as the Organization of the Petroleum Exporting Countries (OPEC) and its allies appear to be content with the recent rally in oil prices, while the International Monetary Fund (IMF) cuts its growth forecast for 2019, but current market conditions may keep energy prices afloat as Relative Strength Index (RSI) still sits in overbought territory. 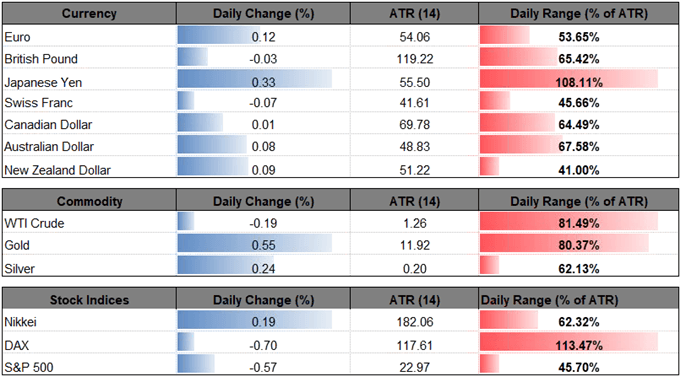 Recent remarks from OPEC and its allies appear to be dragging on crude as Russian Direct Investment Fund CEO Kirill Dmitriev insists that the group ‘could decide in June this year to abandon supply cuts and subsequently increase output,’ but the comments need to be taken into context as he goes onto say that ‘it is important not only to jointly cut output but at times to jointly increase it.’

The tone suggests that the OPEC+ alliance will persist even beyond 2019 as Russia Energy Minister,Alexander Novak, notes that ‘we have a range of instruments, depending on how the situation develops,’ with Saudi Arabian Energy Minister, Khalid Al-Falih, expressing his support for the pact as the energy market is ‘moving in the right direction.’

It remains to be seen if OPEC and its allies will reverse course at the Joint Ministerial Monitory Committee (JMMC) meeting on May 19 as U.S. Crude Inventories are anticipated to increase another 2500K in the week ending April 5, and signs of growing non-OPEC supply may drag on oil prices as weekly field production of crude sits at a record of 12,200K b/d for the week ending March 29. With that said, developments coming out of the U.S. may impact crude over the next 24-hours of trade especially as President Donald Trump tweets – ‘the EU has taken advantage of the U.S. on trade for many years. It will soon stop.’

The renewed threat of a global trade war may rattle the outlook for oil demand as the International Monetary Fund (IMF) adjusts its World Economic Outlook Projections and forecasts the world economy to grow 3.3% per annum in 2019, down 0.2% from the January forecast of 3.5%.

In turn, the next update to OPEC’s Monthly Oil Market Report (MOMR) may reflect similar changes as the U.S. and China still nail out a trade agreement, but current market conditions may keep crude oil afloat as both price and the Relative Strength Index (RSI) extend the bullish formations from late-2018. Moreover, recent developments in the RSI suggest the bullish momentum could still gather pace as the oscillator holds above 70 and sits in overbought territory for the first time this year. 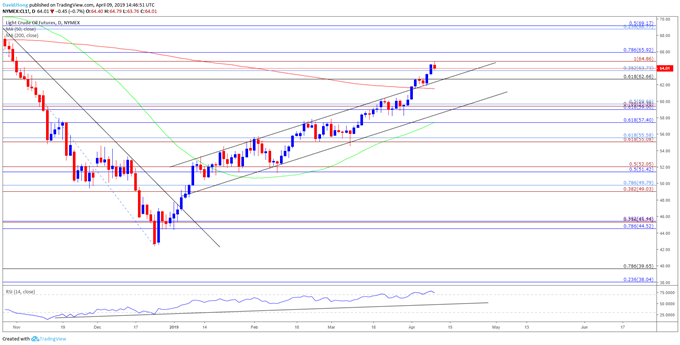