The USD/CAD rally following the Bank of Canada (BoC) meeting appears to have stalled as the exchange rate snaps the series of higher highs & lows from the start of the month, with the Relative Strength Index (RSI) highlighting a similar dynamic as the oscillator flops ahead of overbought territory. 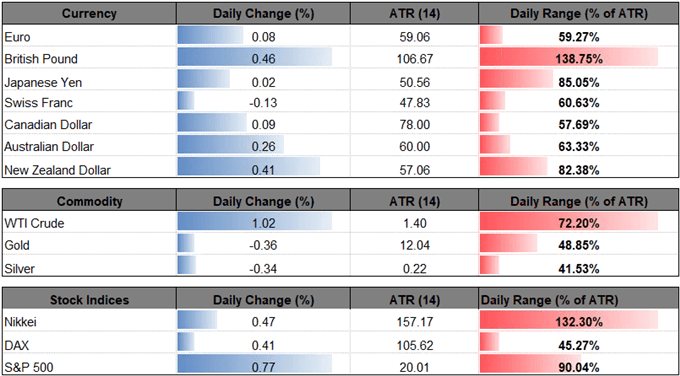 The 55.9K expansion in Canada Employment appears to have curbed the recent rally in USD/CAD as the above-forecast print highlights a robust labor market, but the development may do little to influence the monetary policy outlook as the BoC asserts that ‘consumer spending and the housing market were soft, despite strong growth in employment and labour income.’

With that said, the BoC may continue to change its tune over the coming months as ‘it now appears that the economy will be weaker in the first half of 2019 than the Bank projected in January,’ and Governor Stephen Poloz & Co. look poised to retain the current policy at the next meeting on April 24 amid the ‘increased uncertainty about the timing of future rate increases.’ As a result, the Canadian dollar stands at risk of facing a more bearish fate over the near-term as the BoC warns that ‘the slowdown in the fourth quarter was sharper and more broadly based,’ and the central bank may continue to alter the forward-guidance for monetary policy as the ‘Governing Council will be watching closely developments in household spending, oil markets, and global trade policy.’

In turn, waning bets for a BoC rate-hike reinforces a constructive outlook for USD/CAD, with attention now turning to the fresh data prints coming out of the U.S. economy as updates to the Retail Sales report show household spending rebounding 0.2% at the start of 2019 after contracting a revised 1.6% in December.

It remains to be seen if the U.S. Consumer Price Index (CPI) will spark a meaningful reaction as the headline print is expected to hold steady at 1.6% in February, with the core reading highlighting a similar dynamic as the gauge is projected to print at 2.2% for the fourth consecutive month. Signs of sticky price growth may ultimately heighten the appeal of the U.S. dollar as it puts pressure on the Federal Reserve further embark on its hiking-cycle, but recent remarks from Fed officials indicate that the central bank will start tapering the $50B/month in quantitative tightening (QT) over the coming months as Chairman Jerome Powell states that ‘the Committee can now evaluate the appropriate timing and approach for the end of balance sheet runoff.’

Keep in mind, it seems as though the Federal Open Market Committee (FOMC) stands ready to tolerate above-target inflation as Chairman Powell argues that the central bank won’t ‘overreact’ if price growth holds above 2%, and a material adjustment in the Summary of Economic Projections (SEP) may influence the near-term outlook for USD/CAD as the previous projections still point to a longer-run interest rate of 2.75% to 3.00%. Until then, the broader outlook for USD/CAD remains constructive following the break of the June-high (1.3386), with the exchange rate now at risk of making a run at the yearly-high (1.3663) as it stages a near-term breakout after bouncing along the 200-Day SMA (1.3160).

However, recent price action warns of a larger pullback as USD/CAD snaps the series of higher highs & lows from the start of the month, with the Relative Strength Index (RSI) highlighting a similar dynamic as the oscillator flops ahead of overbought territory. Sign up and join DailyFX Currency Analyst David Song LIVE for an opportunity to discuss potential trade setups. 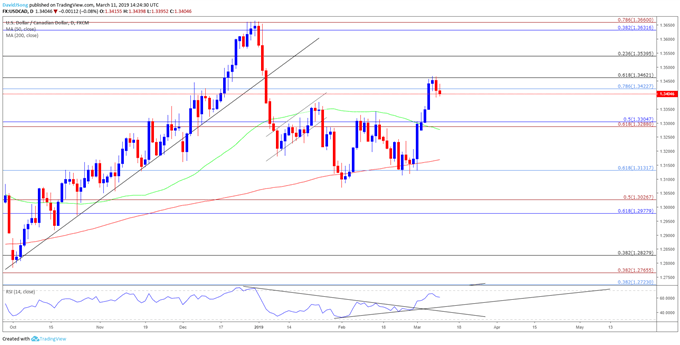