Crude pulls back from the monthly-high ($57.81) as U.S. President Donald Trump tweets ‘oil prices getting too high,’ and recent price action raises the risk for a larger pullback as the Relative Strength Index (RSI) reverses course ahead of overbought territory. 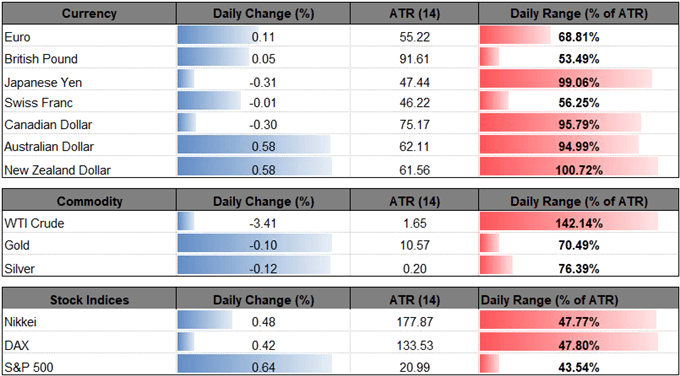 It seems as though President Trump is attempting to curb the near-term recovery in crude as he tells the Organization of the Petroleum Exporting Countries (OPEC) to ‘please relax and take it easy,’ and the administration may continue to push for lower oil prices as ‘the world cannot take a price hike.’

The jawboning puts crude at risk of facing increased volatility ahead of the next OPEC meeting in April amid the weakening outlook for global growth, but the group may show little to no interest in abandoning the rebalancing efforts as the most recent Monthly Oil Market Report (MOMR) projects a further reduction in oil demand.

In turn, OPEC and its allies may continue to curb production even as energy exports from Iran and Venezuela remain battered by the U.S. sanctions, and the threat of non-OPEC supply may encourage the group to extend the joint venture asfresh updates from the U.S. Energy Information (EIA) show U.S. crude weekly field output climbing to a record 20,000K b/d in the week ending February 15.

Keep in mind, the rise comes after U.S. output held steady at 11,900K b/d for the past four consecutive weeks, and it remains to be seen if the alliance will be extended beyond the six-month agreement amid the mixed comments coming out of Russia.

Nevertheless, the current environment instills a constructive outlook for crude especially as an inverse head-and-shoulders formation appears to be taking shape, but oil prices stand at risk of facing a larger pullback going into the end of the month as the Relative Strength Index (RSI) fails to push above 70 and reverses course ahead of overbought territory. Sign up and join DailyFX Currency Analyst David Song LIVE for an opportunity to discuss potential trade setups. 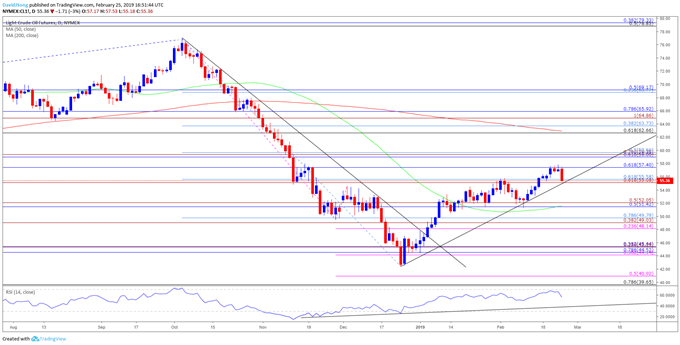