AUD/USD extends the rebound from late last week as the U.S. and China, Australia’s largest trading partner, appear to be on track to reach a trade deal, but the exchange rate may face range-bound conditions ahead of the next Reserve Bank of Australia (RBA) meeting on March 5 as the central bank shows a greater willingness to further support the economy. 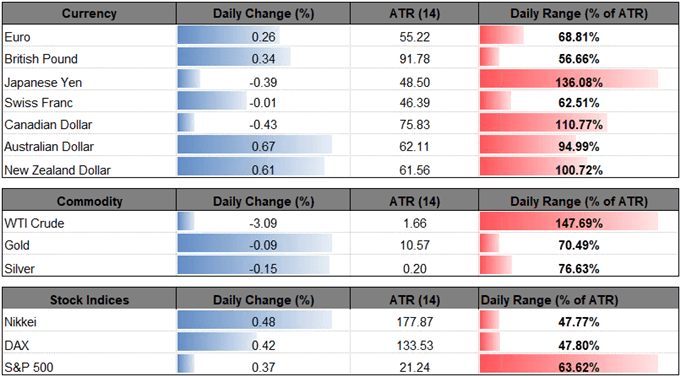 Developments surrounding China may continue to sway AUD/USD as U.S. President Donald Trump pledges to delay the fresh round of tariffs and hold a summit for President Xi Jinping at Mar-a-Lago, but the weakening outlook for global growth may continue to drag on the Australian dollar as ports in China start to ban imports of Australian coal.

Keep in mind, Treasurer Josh Frydenberg has warned against ‘jumping to conclusions,’ with RBA Governor Philip Lowe assuring that the central bank does not expect the recent action ‘to have a dramatic effect on the economy.’ However, efforts to avoid a trade war may do little to boost the economic outlook as the central bank warns that ‘there were significant uncertainties around the forecasts, with scenarios where an increase in the cash rate would be appropriate at some point and other scenarios where a decrease in the cash rate would be appropriate.’

In fact, Governor Lowe warned that ‘the probability that the next move is up and the probability that it is down are more evenly balanced’ while delivering the semi-annual testimony in front of Parliament, and it seems as though the RBA will adopt a more dovish tone over the coming months amid ‘the protracted period of relatively low growth in aggregate household income.’ In turn, the Australian dollar may face a more bearish fate over the coming months as the RBA stands ready to further reduce the official cash rate (OCR), but recent price action raises the risk for a run at the monthly-high (0.7284) as the aussie-dollar exchange rate reverses course ahead of February-low (0.7054). Sign up and join DailyFX Currency Analyst David Song LIVE for an opportunity to discuss potential trade setups. 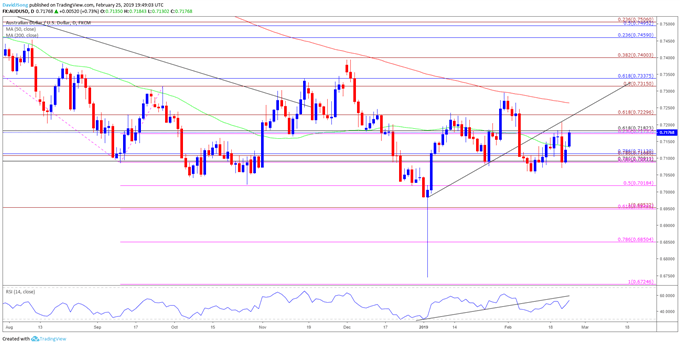