USD/JPY continues to track the upward trend from earlier this year as the U.S. and China appear to be making a greater effort to achieve a trade deal, but the failed attempts to test the 200-Day SMA (111.30) raises the risk for a larger pullback as the bullish momentum appears to be abating. 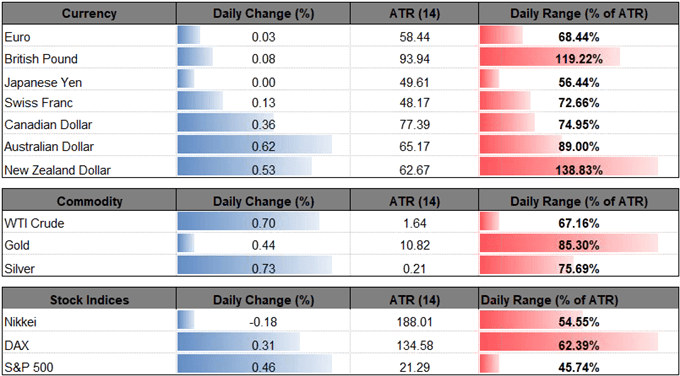 President Donald Trump is scheduled to meet with China Vice Premier Liu Helater this afternoon as the fresh wave of U.S. tariffs go into effect next month, and signs of an imminent trade deal may heighten the appeal of the dollar as it renews bets for a Federal Reserve rate-hike in 2019.

Keep in mind, the Federal Open Market Committee (FOMC) Minutes suggests the central bank has yet to abandon the hiking-cycle as the central bank pledges to be ‘data dependent,’ but the ongoing shift in trade policy may encourage a growing number of Fed officials to endorse a wait-and-see approach as the European Union (EU) stands ready to retaliate against U.S. tariffs. 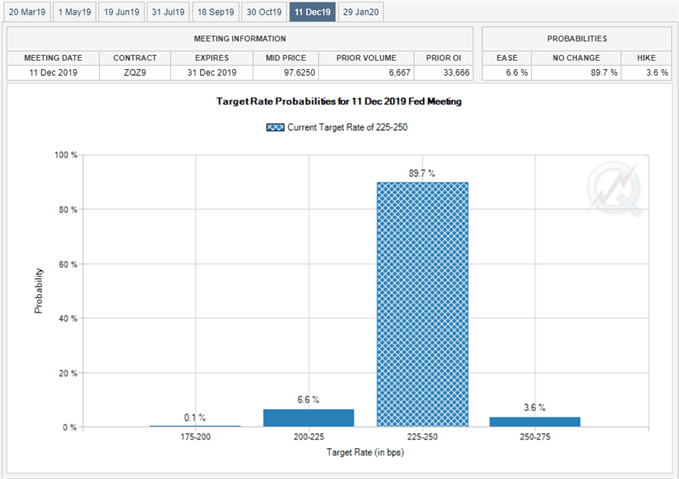 According to Bloomberg News, EU officials are drawing up a potential list of U.S. companies that would be targeted if the Trump administration were to raise duties on European vehicles, and the FOMC may have little choice but to further adjust the forward-guidance for monetary policy amid the ‘cross currents’ clouding the economic outlook. In turn, Chairman Jerome Powell & Co. may continue to endorse a wait-and-see approach ahead of the next meeting in March, and Fed Fund Futures may persistently show the FOMC on hold throughout 2019 especially as the central bank appears to be on track to winddown the $50B/month in quantitative tightening (QT) over the coming months.

With that said, the U.S. dollar may continue to face headwinds over the near-term as the Fed officials change their tune, and the failed attempts to test the 200-Day SMA (111.30) raises the risk for a larger pullback as the exchange rate appears to be coming off of channel resistance. However, the bullish momentum appears to be abating as the Relative Strength Index (RSI) reverses course ahead of overbought territory, with the oscillator at risk of flashing a bearish signal as it approaches trendline support. Sign up and join DailyFX Currency Analyst David Song LIVE for an opportunity to discuss potential trade setups. 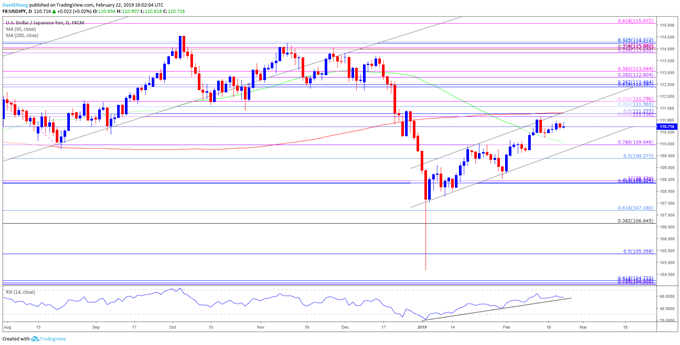