AUD/USD extends the advance from the monthly-low (0.7054) amid hopes for an imminent US-China Trade Deal, but fresh developments coming out of the Asia/Pacific region may drag on the exchange rate as the Reserve Bank of Australia (RBA) Minutes reiterate that‘there was not a strong case for a near-term adjustment in monetary policy.’ 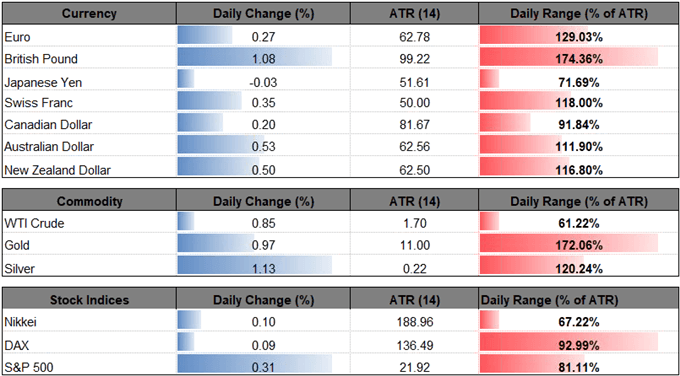 AUD/USD catches a bid as both the U.S. and China, Australia’s largest trading partner, appear to be forming a trade deal that would revoke Beijing’s ability to retaliate against American tariffs by devaluing its currency.

The clause should ultimately help to reduce the threat of a trade war as both the U.S. and China agree to a stable-yuan policy, but the negotiations may have a limited impact on the RBA’s policy as ‘members noted that there were significant uncertainties around the forecasts, with scenarios where an increase in the cash rate would be appropriate at some point and other scenarios where a decrease in the cash rate would be appropriate.’

In fact, updates to Australia’s Wage Price Index (WPI) may keep the RBA on the sidelines as the gauge for household earnings is expected to hold steady at 2.3% per annum in the fourth-quarter of 2018, and signs of subdued wage growth may encourage the central bank to further support the economy as ‘recent data had prompted a downward revision to the consumption outlook.’ In turn, Governor Philip Lowe may defend the wait-and-see approach in front of lawmakers as the central bank head is scheduled to testify in front of Parliament later this week, and the RBA may merely attempt to buy more time at the next meeting on March 5 as members pledge to ‘assess the outlook carefully.’

As a result, fresh developments coming out of Australia may rattle the near-term rebound in AUD/USD especially as the RBA adjusts the forward-guidance for monetary policy, but recent price action raises the risk for a larger rebound asthe aussie-dollar exchange rate reverses course ahead of the 0.7020 (50% expansion) region. Sign up and join DailyFX Currency Analyst David Song LIVE for an opportunity to discuss potential trade setups. 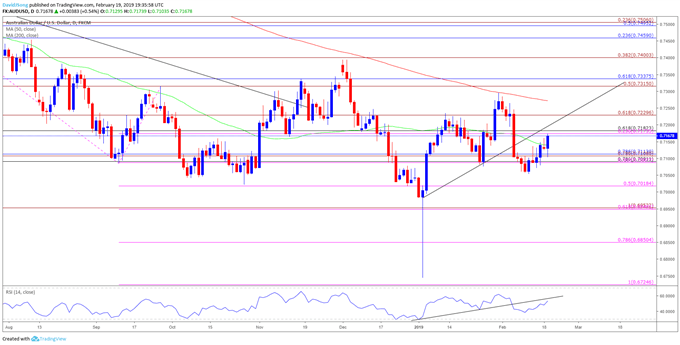