AUD/USD catches a bid ahead of the Reserve Bank of Australia (RBA) Minutes, with Governor Philip Lowe alsoscheduled to testify in front of Parliament next week, and fresh comments coming out of the central bank may rattle the recent rebound in the exchange rate as the board alters the forward-guidance for monetary policy. 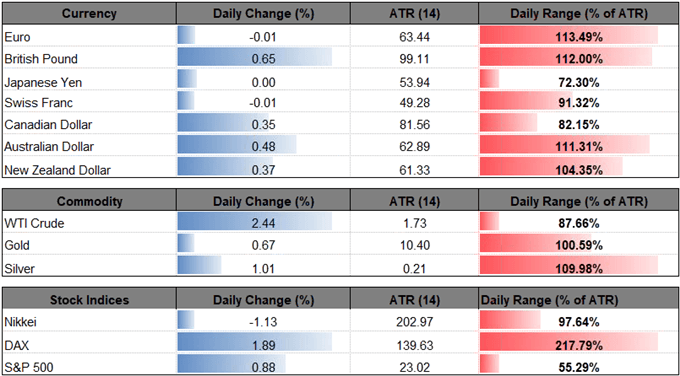 AUD/USD extends the advancefrom the monthly-low (0.7054) following the slew of dismal data prints coming out of the U.S. economy, and the exchange rate may stage a larger recovery over the coming days as it breaks out of a narrow range.

However, the RBA Minutes may produce headwinds for the Australian dollar as Governor Lowe warns that the interest rate outlook is ‘much more evenly balance,’ and the central bank may continue to adjust the forward-guidance amid the weakening outlook for the Asia/Pacific region. 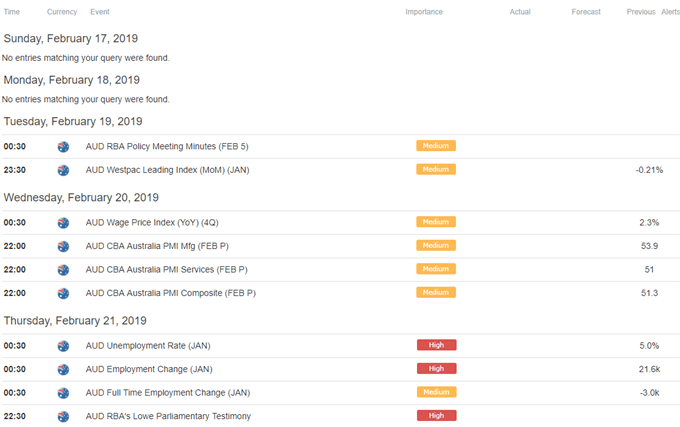 In turn, Australia’s Employment report may ultimately generate a limited reaction as the RBA shows a greater willingness to further support the economy, and the testimony with Governor Lowe may drag on the Australian dollar as the central bank head warns that ‘it is possible that the economy is softer than we expected.’ With that said, it seems as though the RBA will keep the official cash rate (OCR) at the record-low for the foreseeable future, and the RBA may have little choice but to adopt a more dovish tone ahead of the next meeting on March 5 if the U.S. and China, Australia’s largest trading partner, struggle to reach a trade deal.

As a result, AUD/USD stands at risk of facing near-term headwinds over the days ahead, with the broader outlook still tilted to the downside as the flash-crash stalls at the 200-Day SMA (0.7276). Moreover, aussie-dollar has failed to retain the bullish formation from earlier this year, with the Relative Strength Index (RSI) highlighting a similar dynamic, and the recent rebound may end up being short-lived if the fresh comments coming out of the RBA boost speculation for a rate-cut. Sign up and join DailyFX Currency Analyst David Song LIVE for an opportunity to discuss potential trade setups. 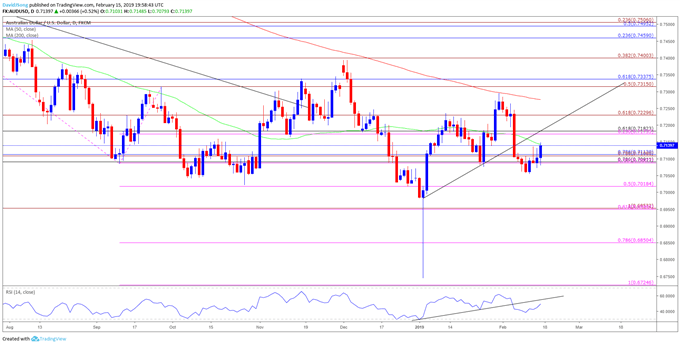