NZD/USD jolts higher following the Reserve Bank of New Zealand’s (RBNZ) first meeting for 2019, and the Parliament testimony with Governor Adrian Orr may continue to shake up the exchange rate as the central bank alters the forward-guidance for monetary policy. 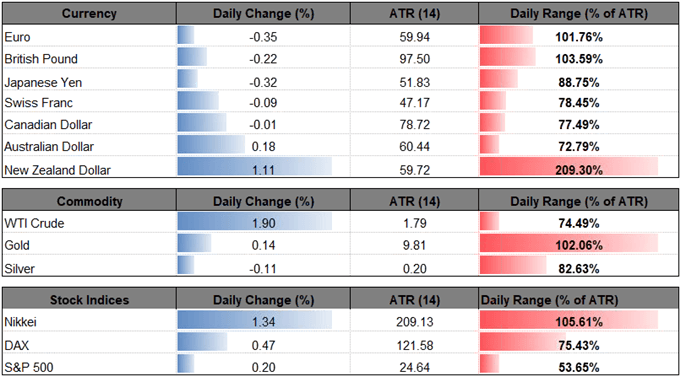 It seems as though the RBNZ is in no rush to lift or reduce the official cash rate (OCR) off of the record-low ‘given softer GDP growth and weaker momentum in the global economy,’ and the central bank may merely attempt to buy more time at the next meeting on March 26 even though the statement notes that ‘the direction of our next OCR move could be up or down.’

In fact, the comments suggest interest rates will stay on hold throughout the year as officials ‘expect to keep the OCR at this level through 2019 and 2020,’ and the RBNZ may continue to tame bets for an imminent rate-hike as ‘softer global conditions affect New Zealand through several channels.’ At the same time, there appears to be little to no talks for a rate-cut as the RBNZ asserts that ‘there are upside and downside risks to this outlook,’ and the central bank may strike a more balanced tone this year as ‘monetary and fiscal stimulus are expected to lift GDP growth during 2019.’

Keep in mind, the latest update from the RBNZ show a more shallow and protracted path for the benchmark interest rate as ‘annual CPI inflation is forecast to reach 2 percent in late 2020,’ and Governor Orr may largely endorse a wait-and-see approach in front of lawmakers as the central bank head is scheduled to testify in front of the Finance & Expenditure Committee. However, the reaction to the RBNZ meeting may unravel should Governor Orr show a greater willingness to further support the economy, and fresh data prints coming out of the U.S. economy may also produce headwinds for NZD/USD as updates to the U.S. Consumer Price Index (CPI) show the core reading for inflation unexpectedly holding steady at 2.2% per annum in January.

Signs of sticky price growth may challenge the recent shift in the Federal Reserve’s forward-guidance as the U.S. economy shows little to no signs of a recession, and the narrow threat for another government shutdown may put pressure on Chairman Jerome Powell & Co to further normalize monetary policy in 2019 as Fed officials continue to project a longer-run interest rate of 2.75% to 3.00%. Moreover, it remains to be seen if the Federal Open Market Committee (FOMC) will taper the $50B/month in quantitative tightening (QT) as the 304K is U.S. Non-Farm Payrolls (NFP) highlights the scope for a further improvement in the labor market, and the FOMC may find it difficult to defend the adjustment in the monetary policy outlook as Fed officials pledge to be ‘data dependent.’

Keep in mind, the broader outlook for NZD/USD remains constructive as both price and the Relative Strength Index (RSI) still track the upward trends from 2018, and the advance from the 2019-low (0.6586) may continue to evolve over the coming days especially as Governor Orr argues that the changes for a rate-cut have no increased. Sign up and join DailyFX Currency Analyst David Song LIVE for an opportunity to discuss potential trade setups. 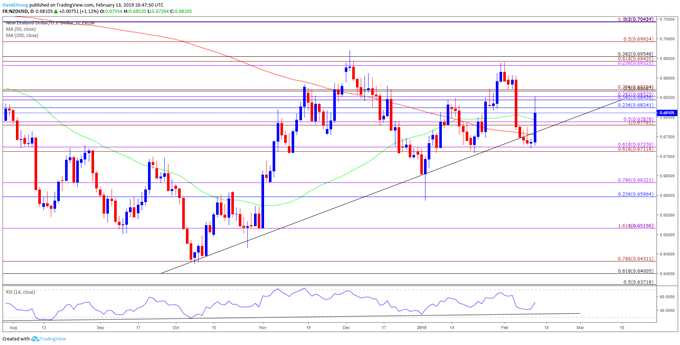