AUD/USD climbs to fresh monthly highs as the Federal Reserve’s drops the hawkish forward-guidance for monetary policy, and recent price action raises the risk for a larger flash-crash rebound as the Relative Strength Index (RSI) breaks out of the bearish formation from late-2018. 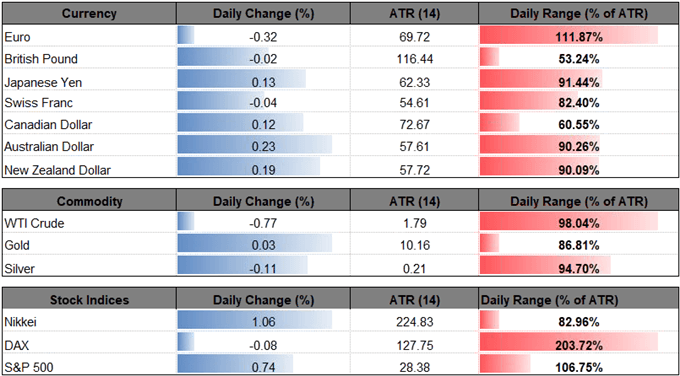 AUD/USD appears to be on track to test the December-high (0.7394) ahead of the Reserve Bank of Australia’s (RBA) first meeting for 2019 as the Federal Open Market Committee (FOMC) interest rate decision triggers a selloff in the U.S. dollar.

Like the Fed, the RBA is widely expected to retain the current policy on February 5 amid the uncertainty surrounding the global economy, and more of the same from Governor Philip Lowe & Co. may rattle the aussie-dollar exchange rate as the central bank appears to in no rush to lift the official cash rate (OCR) off of the record-low.

In fact, the stickiness in Australia’s Consumer Price Index (CPI) may do little to move the RBA amid the weaken outlook for global growth, and the central bank may ultimately show a greater willingness to retain the record-low interest rate throughout 2019 as ‘the low level of interest rates is continuing to support the Australian economy.’ With that said, comments from the RBA may produce headwinds for the Australian dollar as the central bank tames bets for an imminent rate-hike, but the flash-cash rebound appears to be spurring a shift in retail interest as the crowd flips net-short for the first time since November. 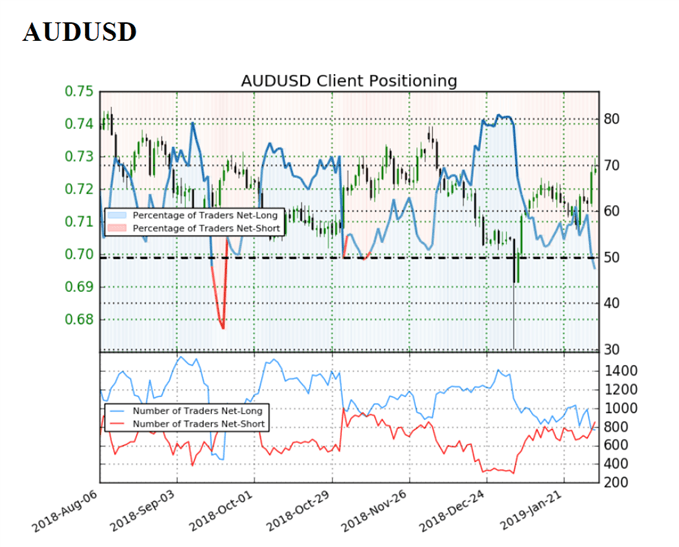 The decline in net-long interest persists appears to be a culprit of profit-taking behavior, but the ongoing accumulation in net-short position warns of a broader shift in retail sentiment as the crowd fades the flash-crash rebound in AUD/USD. Keep in mind, the break of the monthly range instills a constructive outlook, with the recent series of higher highs & lows raising the risk for a larger correction especially as the Relative Strength Index (RSI) breaks out of the bearish formation carried over from November. Sign up and join DailyFX Currency Analyst David Song LIVE for an opportunity to discuss potential trade setups. 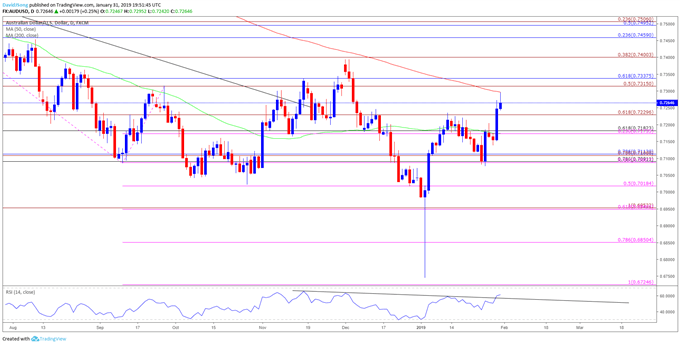