USD/JPY bounces back from the session-low (110.93) as New York Fed President John Williams defends the recent decision to raise the benchmark interest rate to 2.25% to 2.50%, but the Relative Strength Index (RSI) appears to be on the cusp of flashing a bearish signal as it flirts with oversold territory. 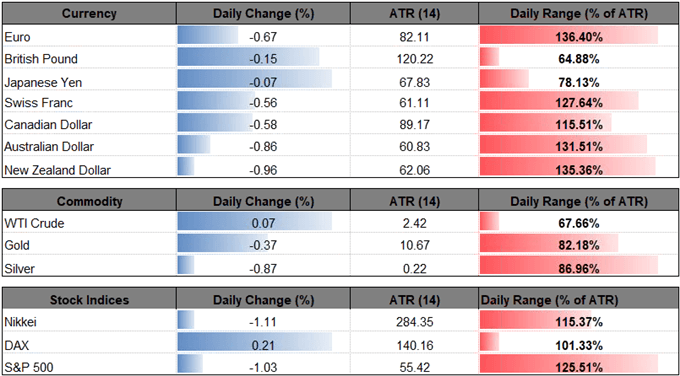 Fresh comments from Mr. Williams suggest the Federal Reserve will continue to embark on its hiking-cycle as the permanent voting-member on the Federal Open Market Committee (FOMC) argues that ‘two rate increases would make sense in the context of a really strong economy,’ and the central bank may continue to prepare U.S. households and business for a less accommodative stance as officials ‘don’t seethe need today to change our balance-sheet normalization.’

The FOMC appears committed in further normalizing monetary policy as Chairman Jerome Powell & Co. continue to project a longer-run interest rate forecast of 2.75% to 3.00%, butthe central bank may adopt a less-hawkish tone over the coming months as fresh data prints coming out of the economy instill a mixed outlook for growth and inflation.

Updates to the 3Q U.S. Gross Domestic Product (GDP) report reveal an unexpected downward revision in the growth rate, with the gauge narrowing to 3.4% from an initial forecast of 3.5%, while a separate report shows Non-Defense Capital Goods Orders excluding Aircrafts, a proxy for business investment, contracting 0.6% in November versus forecasts for a 0.2% expansion.

Signs of a slowing economy may encourage Chairman Jerome Powell & Co. to conclude the hiking-cycle ahead of schedule, and USD/JPY appears to broadly tracking the decline in U.S. Treasury yields as both of instruments slip to fresh monthly lows following the last FOMC meeting for 2018. With that said, failure to preserve the opening range for December keeps the downside targets for the dollar-yen exchange rate rate especially as the pickup in volatility fuels the recent shift in retail sentiment. 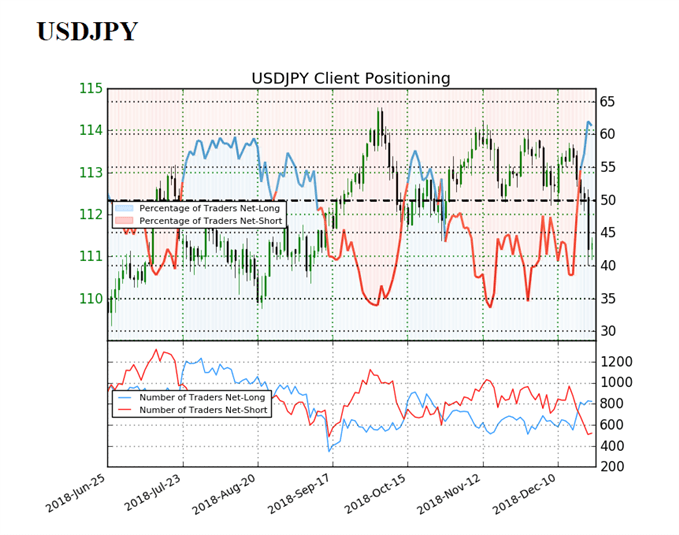 The ongoing drop in net-short position is indicative of profit-taking behavior as USD/JPY trades near the monthly lows, but the tilt in retail interest offers a contrarian view to crowd sentiment as the series of failed attempt totest the 2018-high (114.55) warns of a larger correction. At the same time, developments in Relative Strength Index (RSI) warrants attention as the oscillator snaps the upward trend from earlier this year, with a break below 30 raising the risk for a further decline in USD/JPY as the bearish momentum gathers pace. Sign up and join DailyFX Currency Analyst David Song LIVE for an opportunity to discuss potential trade setups. 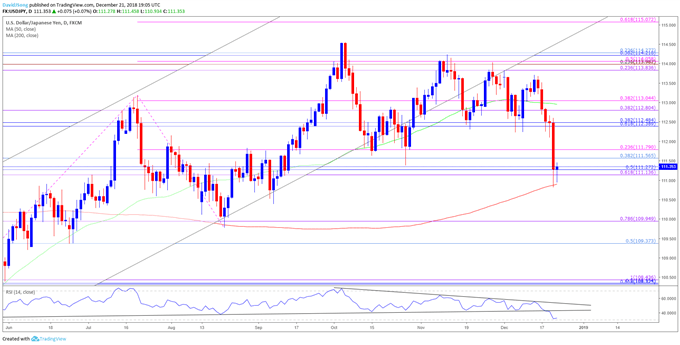